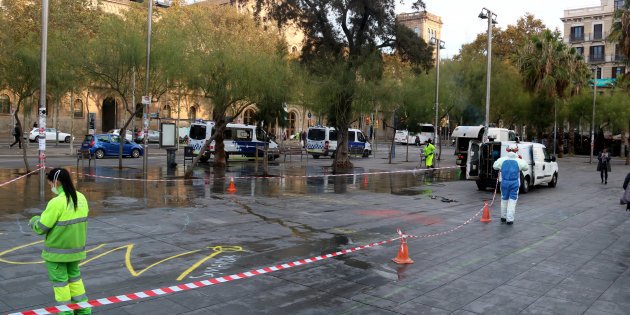 The local police in Barcelona, the Guàrdia Urbana, have cleared the campsite away from the central Barcelona square of Plaça Universitat, where students had been protesting for three weeks. There were reports of two arrests.

The protestors had set up camp in the square under the slogan of the “14 October Generation” to reject the sentencing of the Catalan independence leaders to 9-13 years behind bars. The verdict had been delivered by Spain’s Supreme Court on 14 October.

The local police began clearing the campsite at 1am on Wednesday morning. The two students arrested were reportedly for challenging authorities and resisting the police operation.

Around 50 tents has been pitched in the Plaça Universitat since 30 October, after about 200 students calling themselves the ‘October 14 Generation’ began an indefinite protest camp, demanding the return of ‘everything that’s been taken from us’ in reference to ‘rights and freedoms’. They had also protested against recent police violence during demonstrations in Catalonia. Initially, concerts were also held in the square.

After the first few days, the students received food, furniture and also money from some organisations.

Reports followed, however, that some of the students had allegedly stolen items for the campsite from a nearby public building, and there was also a suspected sexual attack by one of the students in a local shop.

On Wednesday morning, around 20 police vans cut off the section of Gran Via and Aribau streets, as officers started to dismantle the campsite, removing material that blocked the way to the tents before removing all camping facilities.

Scenes of tension followed as some of the protestors resisted the police attempts to clear them from the square. However, within a quarter of an hour, they were cleared and cleaning services had started to clear up everything that was left.

Former president of Andalusia sentenced to six years in prison