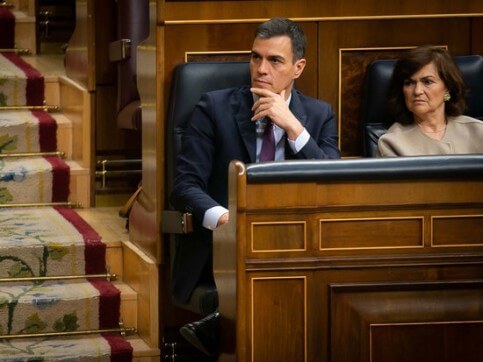 Spain’s Prosecutors’ Association [the Asociación de Fiscales (AF)] issued a statement on Wednesday to remind Spain’s acting prime minister, Pedro Sánchez, of its independence, and that it does not follow the orders of the Spanish government.

Spain’s public prosecutor (or attorney general), is appointed by the Spanish government every four years, but the Spanish constitution stresses that the office should remain independent and impartial.

In the TV debate on Monday, Sánchez vowed to bring Puigdemont back to Spain in order to face trial for his role in the 2017 independence bid.

Carles Puigdemont’s own response came via Twitter, warning Sánchez that he was not in a position to make such a promise unless he was willing to carry out ‘illegal acts’, such as ‘interfering with the judiciary’ or ‘kidnapping’ him.

During a radio interview on Wednesday, Sánchez explained that the public prosecutor recently issued a European Arrest Warrant for Puigdemont, and then asked: ‘Who does the prosecutor answer to?’ The anchor responded: ‘To the government.’ Sánchez concluded: ‘Then, that’s it.’

Sánchez’s remarks contrast to his position only a few months ago, when he told Catalan pro-independence parties that he could not tell the public prosecutor to drop the rebellion charges for their leaders on trial.

Spain’s Supreme Court eventually convicted 9 pro-independence leaders for the lesser offence of sedition, with prison sentences ranging from 9 to 13 years.

Sánchez is running for prime minister as the leader of the Socialist (PSOE) party in the 10 November general election. As polls predict he will fall short of a majority to rule alone, he might need the support of Catalan parties to stay in power.