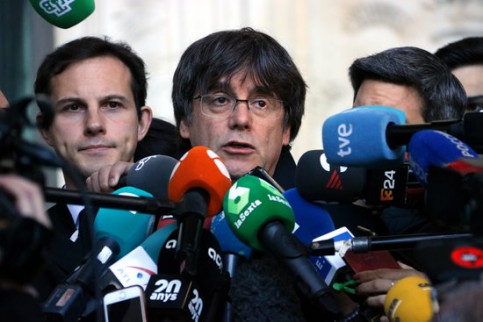 Spain has warned that it will ‘take decisions’ if the Belgian judiciary fails to hand over former Catalan president Carles Puigdemont to answer charges of sedition and misuse of public funds.

Tuesday’s hearing at the Brussels court was postponed until 16 December, as Puigdemont’s lawyers asked for more time to analyse the evidence.

This is the first European Arrest Warrant against Puigdemont since his former colleagues in the Catalan government were sentenced to lengthy prison terms two weeks ago for their role in the 2017 push for independence.

Spain’s acting deputy prime minister, Carmen Calvo, warned Belgium on Tuesday morning that the Spanish government ‘will not understand’ if the Belgian authorities choose not to extradite Puigdemont, and she added that governments ‘have to work together’ on a daily basis.

‘Spain, at least while we remain in government, will not understand if the Belgian state does not recognise the validity of Spanish democracy by refusing to place before our judiciary those who have been charged in an absolutely guaranteed manner,’ said Calvo.