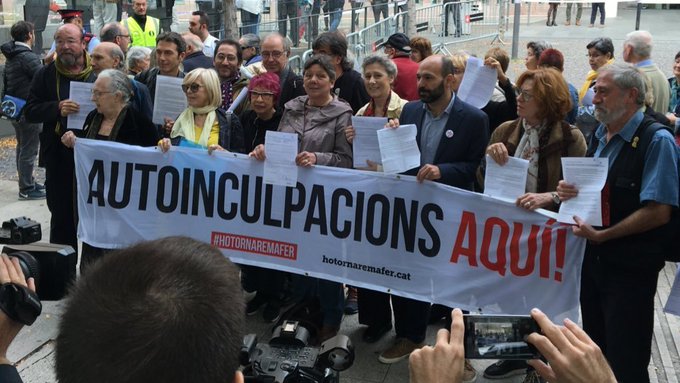 Hundreds of people have queued outside the gates of the City of Justice in Barcelona since 9am on Monday morning, in order to present a letter of ‘self-incrimination’ to the court of law – in protest at the conviction of nine Catalan leaders and activists.

Marcel Mauri, vice president of Òmnium Cultural, an organisation originally created to promote the Catalan language and culture, but more recently has been fighting for Catalan independence from Spain, has called for the self-incrimination campaign that the group is promoting to be the ‘biggest’ in the history of Catalonia.

This is the latest action from the pro-independence camp following the conviction of nine political leaders for their role behind the 2017 referendum on Monday 14 October including Jordi Cuixart, president of Òmnium Cultural. The organisation is arguing that if the Supreme Court has condemned the nine leaders, that they should condemn the other two million people who participated as well.

In a statement to the media, Mauri argued that if political leaders were condemned for ‘peacefully protesting on September 20 and voting on October 1,’ this should also be applied to more than two million people who voted in the referendum in 2017.

He reminded that the political leaders ‘did not take their decisions alone’ and were accompanied by other organisations and citizens.

Hundreds of people have backed the campaign, queueing outside the gates of the City of Justice since 9am on Monday morning to present a letter of self-incrimination to the court of law. The situation has been monitored by Catalan police (the Mossos d’Esquadra), who are currently making sure that those presenting do so one at a time.

Mauri stated that the actions of these people were ‘personal’ and actions of ‘solidarity’, and it was a reiteration that the president of Òmnium Cultural, Jordi Cuixart, as well as the other political leaders convicted for their role in the 2017 referendum, were not considered in any way as having committed a crime.

‘We are also here to accompany the prisoners with this personal gesture of commitment,’ he said, after explaining that over 10,000 people had downloaded the form for self-incrimination.

‘We want it to be massive. In the coming days more people will keep joining,’ said Mauri, who has admitted that he does not know if there will be penal consequences for people who join the campaign.

He said that those participating had to download the form, fill it in, sign it and present it to the nearest judge. He described it as a fast process, but also one that could be slower in certain areas because only 25 people per day can present the letter in some courts.

He once again called for the Spanish state to react and confront the political conflict, after a turbulent two weeks in Catalonia following the release of the guilty verdict. Most recently, Òmnium Cultural, organised a mass protest in Barcelona on Saturday 26 October calling for the freedom of the political leaders.

Finally, the vice president of the organisation has criticised the Interior Minister of the Spanish government, Fernando Grande-Marlaska, for comparing recent protests in Catalonia to the situation in the Basque terrorist conflict.

Mauri has said that the minister has not only has ‘insulted’ the independence movement, but also victims of terrorism. He therefore has urged Marlaska to apologise and to hold those responsible for the police action in recent days in Catalonia accountable.