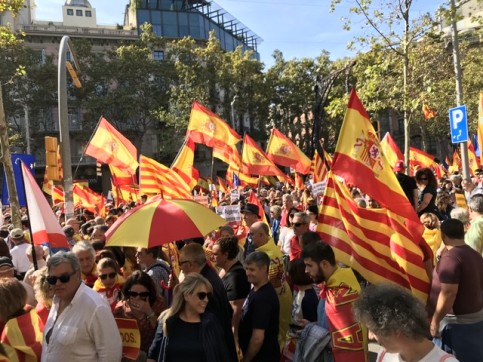 Unionists responded to the recent Catalan pro-independence protests following the sentencing of Catalan leaders with a rally in the centre of Barcelona on Sunday.

According to the local police, 80,000 people attended the rally.

The demonstration was called by anti-independence grassroots group Societat Civil Catalana (SCC), under the slogan ‘For concord, for Catalonia, enough’.

Thousands of Catalans, as well as people coming from Madrid and Valencia, flooded one of Barcelona’s most iconic avenues: the Passeig de Gràcia.

The day after the pro-independence rally

The rally came a day after another pro-independence protest against the sentencing of politicians and activists involved in the 2017 referendum push, which gathered 350,000 supporters in Barcelona’s Marina street on Saturday, according to the local police.

With prison sentences of up to 13 years, the verdict immediately sparked widespread protests in Catalonia when it was announced on the 14 October, with thousands of protesters occupying the Barcelona airport.

This week saw tensions cool down after Barcelona and other Catalan towns descended into unrest for 5 days straight after the Supreme Court ruling came out.

ALSO READ: ‘Without journalism, there is no democracy’ protest in Barcelona

When the Saturday rally came to an end later in the afternoon, many demonstrators moved to Via Laietana, where the Committees in Defence of the Republic (CDRs) had called a protest in front of the Spanish National Police headquarters.