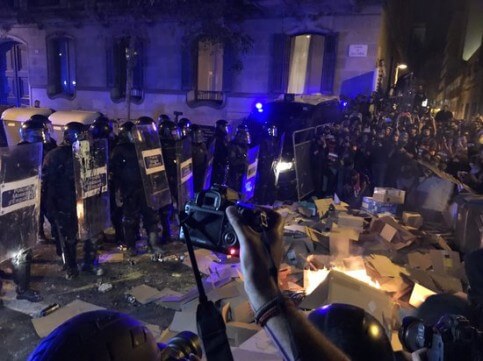 Protests have continued on Tuesday night in the centre of Barcelona between Catalan pro-independence supporters and police officers, as well as in other major towns across Catalonia.

Latest reports [midnight] are that at least 25 people have been arrested: eight in Lleida, 13 in Tarragona, three in Barcelona and one person in Sabadell.

The Spanish government has condemned the ‘widespread violence’ in protests across Catalonia by ‘minority’ groups and promised to guarantee ‘civil co-existence’ with ‘firmness and unity’.

A statement was issued by the Spanish government stating that ‘a minority seeks to impose violence on the streets of Catalan cities, particularly in Barcelona, Tarragona, Girona and Lleida.’

‘It is clear that we are not faced with a peaceful civic movement,’ the statement added, ‘but coordinated acts by groups using violence on the streets to break the co-existence in Catalonia.’

It concluded by saying that the government will ‘guarantee the security and co-existence in Catalonia, and will do so with a commitment to firmness and unity’.

Barcelona mayor Ada Colau described Tuesday night’s scenes in the city centre as ‘unacceptable’, as they ‘put citizens at risk’. She asked all institutions to ‘call for calm’ and ‘unanimously reject’ the use of fire barricades: ‘We are a city of peace and dialogue.’

At the time of the last update of this report [1.15am], no statement had been issued by the Catalan president Quim Torra.

The Catalan government’s vice president had earlier urged pro-independence supporters to distance themselves from ‘violent attitudes’ and warned against the suspension of self-rule: ‘Don’t give them what they want.’

This was the second day of widespread protests in response to the prison sentences handed down to Catalan independence leaders by the Spanish Supreme Court on Monday.

During Tuesday afternoon several rallies called to reject the verdict descended into turmoil as Spanish and Catalan police officers charged against protestors, who in turn responded by throwing objects at them and setting barricades on fire.

Reports so far state that the police have arrested three protestors in Barcelona for attacking the authorities and throwing stones at officers. Waste container bins and barricades have also been set on fire.

Protestors set barricades on fire on Gran de Gràcia, in Barcelona’s Gràcia neighborhood, after the demonstration in front of the Spanish government’s delegation offices in Catalonia.

Earlier in the day, the Catalan government had defended Monday’s police operation, which left 131 injured, whilst blaming all incidents on Madrid and the lengthy prison sentences given to the leaders behind the 2017 independence push.

With prison sentences ranging from 9 to 13 years, former officials and activists were convicted for sedition and, in some cases, misuse of public funds.

Coronavirus in Spain figures (20 May)