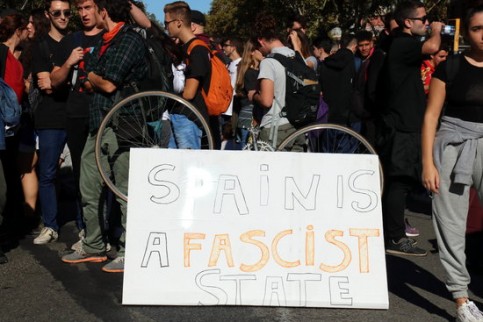 The Catalan wing of the People’s Party (PP) has asked the public prosecutor to launch an investigation into the protests that took place all over Catalonia on Monday in response to the prison sentences handed down to independence leaders by the Spanish Supreme Court.

The protests continued around Catalonia on Tuesday, although not with the numbers that saw railroads and Barcelona airport brought to a standstill the previous day.

He argued that paralysing infrastructure is ‘very serious’ and ‘must not happen again’, and Serrano added that he had called on acting Spanish prime minister, Pedro Sánchez, to ‘guarantee order’ in Catalonia.

He also regretted that protestors were ‘encouraged by the Catalan government itself and separatist leaders’ with the aim of ‘making life impossible for Catalans’, and he appealed to the police to charge those who ‘assaulted Catalan citizens just for carrying a Spanish flag’.

The PP was one of three parties, along with Ciudadanos (Cs) and the Catalan Socialists (PSC), who reported on Tuesday that their party headquarters in Catalonia had been painted overnight with swastikas and the number ‘155’.

Article 155 is the clause of the Constitution invoked by the Spanish government and approved by the Senate to suspend Catalonia’s self-rule following the 1 October referendum and parliament’s declaration of independence in 2017.

On Tuesday, whilst a number of highways, such as the AP-7 at Girona, the C-31 at Verges and the C-25 at Gurb, were blocked by protestors, in the afternoon marches also took place along some of Barcelona’s main avenues, such as Gran Via, Paral·lel and in Plaça Espanya square.

Meanwhile, the two main pro-independence civil groups, Catalan National Assembly (ANC) and Òmnium Cultural, called for major candle-lit demonstrations outside the offices of the Spanish government’s delegations between 7pm and 9pm in the cities of Barcelona, Girona, Lleida, and Tarragona.

The network of protest groups known as Committees in Defence of the Republic (CDR) announced they would join the ANC and Òmnium demonstration in Barcelona, via two marches at 6.30pm that would leave from Jardinets de Gràcia and Plaça de la Universitat.

The Tsunami Democràtic protest group, which organised the occupation of the airport on Monday, told people to watch social media for the announcement of ‘a new challenge’ on Tuesday as part of ‘a cycle of non-violent civil disobedience.’

Some 24 people had to be admitted to hospital after the protest on Monday, and on Tuesday, doctors reported they had been unable to save the eye of a 22-year-old man injured – likely from the impact of a rubber bullet – during the clashes with police at the airport.

Also on Tuesday, it was reported that another man, aged 30, lost part of one of his testicles after an operation at the Hospital Clínic in Barcelona. The man’s family said he had sustained the injury after a Spanish police officer hit him between the legs with a baton.