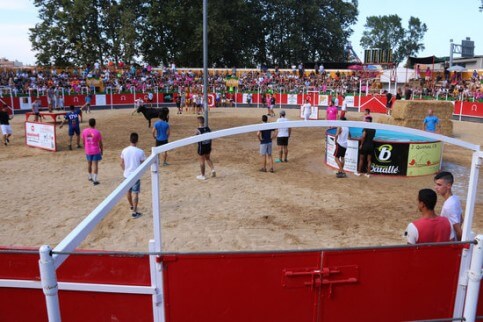 The last bullfight in Catalonia took place on 25 September 2011, at La Monumental bullring in Barcelona. Yet 19 people were injured on Sunday in the Catalan town of Vidreres, one seriously, after a bull escaped during an event and had to be shot dead by local police.

Although the Catalan parliament banned bullfighting in Catalonia in 2010, the ban, which came into effect on 1 January 2012, did not include the tradition of correbous (running bulls through the streets), in which the bulls are not killed.

Sunday’s incident in the town in the northern region of Girona saw a bull escape from its pen and run amok among the public, leaving 19 injured, with one of them – a woman – taken to hospital needing an emergency operation.

All of the other victims who received medical attention were discharged from hospital and are now back at home. The escaped bull was later shot dead by local police after it was trapped in a nearby wood.

The local authority in Vidreres held an emergency meeting, later releasing a statement regretting the incident, saying that the Catalan police (the Mossos d’Esquadra) were investigating and that the future of the event will be revealed in the coming days.

Meanwhile, the legal team for the Lex Ànima association for the ethical treatment of animals said they are considering taking legal action over ‘the irregularities committed during this lamentable spectacle’. The video posted in this report was posted by Lex Ànima on Twitter and shows the moment that the bull escaped from the ring, causing panic among the spectators.

Bullfighting has been a controversial issue in Catalonia ever since parliament voted to ban the tradition. Although supported by animal rights groups, a movement also sprang up to pressure the Spanish Congress into revoking the ban, citing it as ‘cultural heritage’.

Opposition to the prohibition led Spain’s Constitutional Court to overturn the ban on 2 October 2016, with the high court ruling that autonomous communities only have the powers to regulate bullfighting rather than banning it.