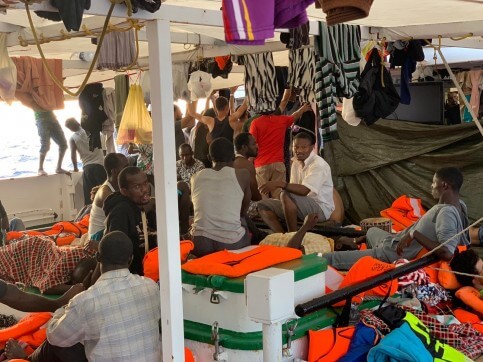 Fourteen days after being rescued from drowning in the Mediterranean Sea by the Catalan NGO Proactiva Open Arms, 134 migrants remain stranded. Italy still refuses to offer them a safe harbour as health conditions deteriorate.

According to the NGO, 134 people remain on board the vessel, after several people were evacuated for medical concerns in the last few hours.

A recent decision from an administrative court in Italy to accept an appeal from Open Arms against Salvini’s ban on sea rescue organisations entering Italian territorial waters seemed to tip the scales in favour of the Catalan NGO. Yet, as the minister in charge of Italian ports, Salvini is managing to prolong the stalemate.

According to Conte, six European countries – Spain, Portugal, France, Germany, Romania, and Luxembourg -have offered to relocate the rescued migrants.

In a message published on Facebook, Conte says Salvini is ‘obsessed’ with having Italy’s ports closed and accuses his minister of being ‘disloyal’.