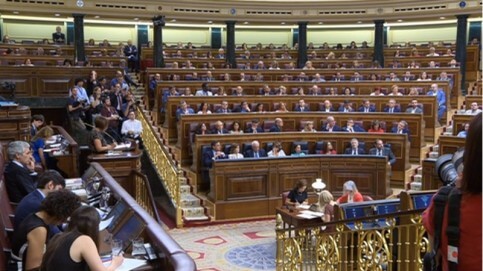 Spanish acting prime minister Pedro Sánchez’s bid to be reinstated in the role was defeated in the first round of votes in Spain’s Congress on Tuesday afternoon.

The Socialist (PSOE) leader, who needed a minimum of 176 votes (an absolute majority), obtained 124 Yes ballots, 170 No votes and 52 abstentions.

On Thursday 25 July, the acting Spanish prime minister will face a second round of votes, in which he will only need a simple majority, that is, more Yes than No votes.

Podemos, who are in coalition talks with the Socialists, abstained in a ‘gesture’ to show willingness to reach a deal by Thursday.

Both Catalan pro-independence parties, the Esquerra Republicana (ERC) and Junts per Catalunya (JxCat) voted No to Sánchez’s bid. At least the abstention of one of them, plus the Yes vote of Podemos are very likely to be needed in the Thursday vote.

Ciudadanos (Cs), the People’s Party (PP) and far-right Vox also rejected the Socialist leader, meaning that the only party supporting him, apart from his 123 colleagues, is a regionalist Cantabrian MP.

The two Basque countries and the Valencian nationalists have abstained, with Navarran and Canarian MPs joinnig the No votes.

Boris Johnson promises to deliver Brexit, Trump tweets: ‘He will be great!’