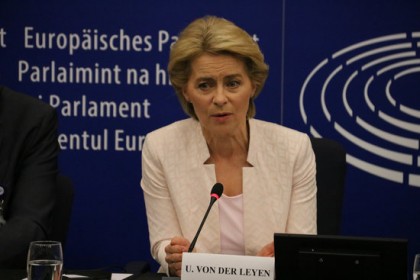 The next president of the European Commission, Ursula von der Leyen, does not consider the situation of jailed and exiled Catalan leaders who have been prevented from taking up their seats as MEPs in the European Parliament to be a political issue.

‘It is not a question of sentiment, or a question of opinion or politics, but rather in large measure it’s a legal matter,’ said the German defense minister, who was this week elected to head the EU’s executive branch, becoming the first woman to hold the post.

In an interview with a number of top European newspapers on Thursday, including La Vanguardia, Von der Leyen reluctantly answered questions about the blocked MEPs, and also showed ‘some discomfort’ when asked, according to the Barcelona-based daily newspaper.

The next Commission president at first wondered whether ‘such a detailed’ question was appropriate, according to La Vanguardia, before she added: ‘To be honest, I have not looked into the matter in any depth.’

The Esquerra Republicana (ERC) party leader Oriol Junqueras, who is in jail awaiting a verdict in the trial of independence leaders, as well as former Catalan president Carles Puigdemont and former minister Toni Comín, both in exile, have had the seats they won in the EU chamber declared vacant.

The issue came up earlier in the week in the EU parliament, in the debate before the vote to appoint Von der Leyen, with Scottish MEP, Alyn Smith, calling on the future Commission president to become an ‘honest broker’ in the Catalan affair.

Smith insisted that the EU chamber is not ‘complete’ due to the absence of Junqueras, Puigdemont and Comín, and he argued that ‘the only solution will be dialogue,’ stating that he hoped Von den Leyen would play a role.

This was countered by conservative Spanish MEP, Esteban González Pons, who told the chamber that he was confident Von der Leyen could be relied on ‘to defend the Spanish rule of law and the unity of Spain.’