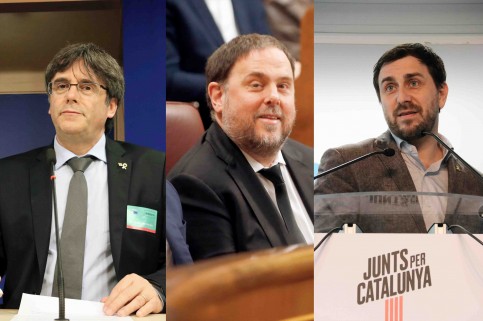 The Court of Justice of the European Union (CJEU) will have its say after Spain excluded three Catalan leaders from the European Parliament, including former president Carles Puigdemont and his jailed vice president, Oriol Junqueras.

Puigdemont and Junqueras, the leaders of Catalonia’s two largest pro-independence parties, played a key role in the bid to separate from Spain in 2017, with prosecutors now requesting prison sentences for the crime of rebellion.

Whilst Spain’s Supreme Court didn’t allow Junqueras to take up the seat he won running in the recent European election from jail, Spanish authorities prevented Puigdemont and Toni Comín from taking the oath of office while exiled in Belgium.

On Monday, the Supreme Court agreed to query the EU’s top court on the extent of Junqueras’ parliamentary immunity, which he claims should apply since the moment he was elected, regardless of whether Spain confirmed his appointment or not.

On the same day, Puigdemont and Comín filed a lawsuit against the EU Parliament at the Court of Justice, based in Luxembourg, and demanded to be allowed to attend Tuesday’s plenary session and take up their seats.

In a preliminary ruling, the EU court dismissed their petition to assume the post, but has yet to decide on the overall case.

Specifically, the court argues that Puigdemont and Comín have already filed an appeal to the Spanish courts for the requirement to take the oath and officially become MEPs, and that the case is still ‘pending’. Therefore, the court affirms that this question must be resolved ‘by national authorities’.

As the EU chamber opens on Tuesday, the seats of Puigdemont, Junqueras, and Comín will remain empty. Yet the voice of the independence movement will surely be heard in Strasbourg, with thousands of Catalans traveling to the French city to protest.

It has been reported that on Tuesday morning Carles Puigdemont was in Germany discussing with his lawyers whether to travel to Strasbourg and join the rally despite the ‘very high risk’ of arrest.

After Germany rejected extraditing the pro-independence leader for the crime of rebellion, Spain withdrew all international arrest warrants against exiled Catalan politicians. Yet a 2002 bilateral agreement with France could allow Spanish police to arrest Puigdemont in French soil.