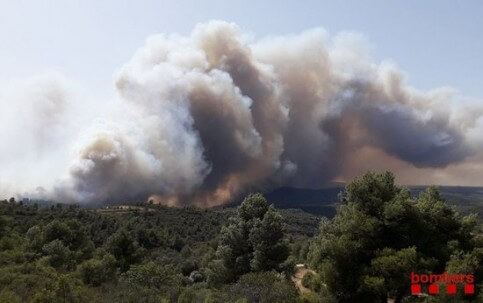 Firefighters continue to battle the uncontrolled wildfire in southern Catalonia on Thursday evening, and in adverse weather conditions

However, the Catalan interior minister Miquel Buch has said that the firefighters working on the wildfire are achieving their objectives according to their strategy.

The fire remains uncontrolled after burning for over 24 hours, and emergency services including the Catalan police force, the Red Cross, and the Spanish army worked through the night to tame the wildfire.

So far the wildfire has now burned through 6,500 hectares of land around the Tarragona region, and estimates say up to 20,000 hectares could be affected by the time the fire is brought under control.

The fire is set to be the worst seen in Catalonia for more than two decades.

In a press conference on Thursday, Buch stated that the works on controlling the southern part of the blaze, where efforts were being concentrated at noon, were going ‘well’, in spite of the difficult weather conditions.

Firefighters are now focussing their controlling efforts on the northern side because that’s the area of the wildfire at risk of growing. For this exact reason, the inhabitants of Bovera, on this wing of the fire, are being confined to the area.

According to the interior minister, the measure has been taken for security reasons, and is part of the actions ordered by those responsible for the fire control operation.

The northern side is currently worrying the firefighters the most given the adverse weather conditions that continue to make it difficult to put the fire out, with moderate winds and very high temperatures.

The minister insisted that they do not believe that the fire will reach the town of Bovera, but that the inhabitants are still being confined as a precautionary measure.

Access to the Montserrat mountain and monastery, as well as other mountain ranges in the surrounding area has been closed for 48 hours for the risk of other fires.

In the nearby Maials, the confinement of elderly people, pregnant women, children and people with respiratory problems has been recommended.

Buch admitted that they cannot rule out more confinements. ‘We are fighting against fire and meteorology,’ he stressed.

About 90 land crews, a dozen air teams, and more than 500 human officers are deployed to fight the fire.