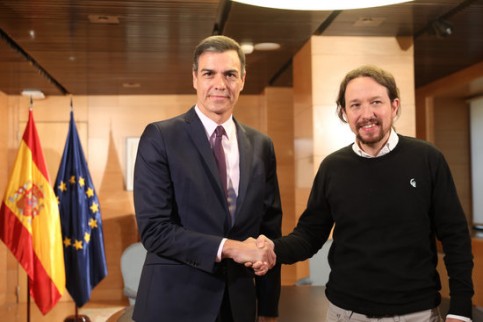 Spain’s Socialist Party (PSOE) may have won the 28 April General Election, but with no clear majority of seats in the Spanish Congress, now comes the challenge of gathering enough support in the chamber to be able to form a stable government.

Acting Prime Minister Pedro Sánchez came to power just over a year ago on the back of a no-confidence motion that relied on the support of the pro-independence parties, but this time PSOE is looking to avoid having to negotiate with them.

On Monday, the Socialists appealed to the ‘generosity and patriotism’ of the right-wing People’s Party (PP) and Ciudadanos (Cs), calling on them to put aside their ideological differences and abstain in the vote to invest Sánchez.

In order to help force the cooperation of its political opponents, PSOE also ramped up the pressure by threatening a repeat of the general election, in which neither PP nor Cs did as well as expected, as the only ‘viable alternative’ to making Sánchez prime minister.

However, Cs, which ran an election campaign focused on keeping Sánchez out of power, ruled out helping the Socialists form a government on Monday, limiting any potential cooperation to occasional agreements on key areas, such as ‘the issue of Catalonia’.

As for PP, while in 2016 the Socialists agreed to abstain to allow Mariano Rajoy become prime minister, it does not seem as if they are willing to return the favour, not only ruling out facilitating Sánchez’s return to power but vowing ‘to make it more difficult’.

While Podemos is keen on a coalition with PSOE, together the two left-wing parties do not have the 176 seats needed for a majority. The votes of the pro-independence parties would make up the shortfall if Sánchez was prepared to discuss a referendum in Catalonia.

Yet, that is something the PSOE leader consistently ruled out in the run-up to the general election, as he came under fire from PP and Cs, who accused the Socialists of being willing to bargain with Spanish unity in dealing with the pro-independence parties.

However, given Sánchez’s position, the Catalan parties Esquerra Republicana (ERC) and Junts per Catalunya (JxCat), which have 22 seats between them in the Congress, see bringing PSOE to the negotiation table as the only way forward out of the impasse.

On Monday, JxCat warned Sánchez that he cannot hope to govern Spain ‘without listening to Catalonia’ and regretted that the way things stand the pro-independence parties cannot consider supporting his investiture because ‘there is no dialogue’ nor ‘willingness to listen’.

With little uniting them beyond their opposition to Catalan self-determination, Sánchez is due to sit down with PP and Cs on Tuesday to explore possible avenues to forming a government that might make a deal with the pro-independence parties unnecessary.