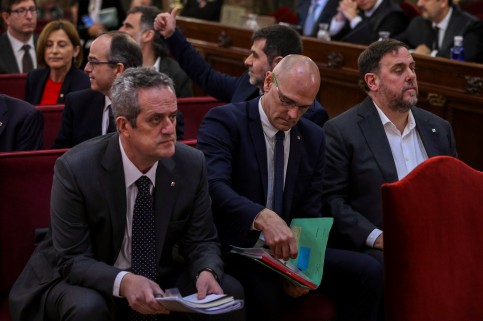 Spain’s Supreme Court has granted Joaquim Forn temporary leave from prison in order to take his seat in Barcelona’s City Hall for its opening session on Saturday.

Forn, Catalonia’s interior minister at the time of the failed independence drive, won election to represent Junts per Catalunya (JxCat) as a local councillor in the municipal elections held on 26 May.

He will be transferred to Barcelona by Friday from the prison in the Madrid suburb where he is being held, shortly after the end of the trial against him and 11 other pro-independence leaders.

The court stipulated on Tuesday that Forn has to be transferred back immediately after Saturday’s session.

Once he formally takes his seat, Forn is very likely to be suspended as local councillor. Since July 2018, the Supreme Court has ordered the temporary suspension of any jailed leader as representatives of the Catalan or Spanish parliaments until a verdict is reached in their case.

The public prosecutor has already requested his suspension as soon as he becomes councillor.

The Supreme Court must also now decide whether to allow jailed pro-independence leader Oriol Junqueras to take the oath in Madrid in order to take up his seat as an MEP on 17 June.

The public prosecutor has already protested against him getting the permission on the grounds that it would hold up the judicial proceedings against him and the 11 other defendants.

Yet the independence trial is expected to come to a close on Wednesday or Thursday, a few days before Junqueras would join the rest of newly-elected MEPs for the swearing-in ceremony.