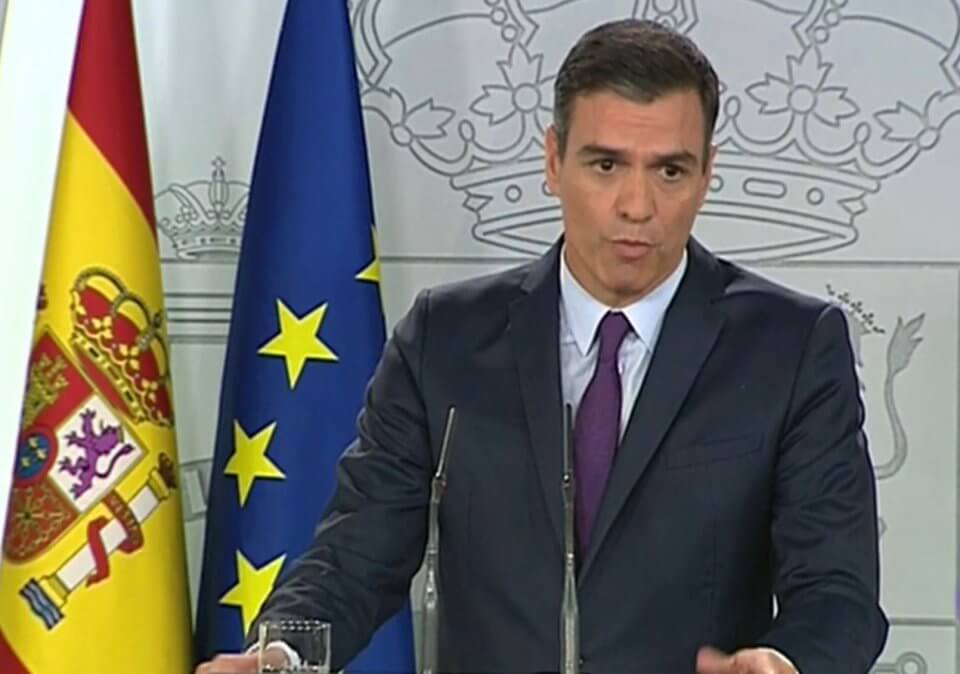 Acting Prime Minister Pedro Sánchez is to form a new government in Spain, after receiving and accepting the order from Felipe VI to be the candidate as PM for the inauguration of a new term. It follows a round of traditional talks that the monarch has held with leaders of all the main political parties on Wednesday and Thursday.

‘The Spanish people were clear with their vote: they want the PSOE to govern,’ said Sánchez at a press conference on Thursday. ‘There is no other alternative possible. Or the PSOE governs, or the PSOE governs.’

He said it was the majority mandate of the Spanish people expressed in the 28 April General Election, and that ‘was reinforced’ in the local and regional elections of 26 May, where again the PSOE returned to be the main political force. ‘It is an honour to be able to lead Spain, our great country,’ he said.

Next week Sánchez will open a round of formal meetings with the leaders of the three main parties after the PSOE, ‘because they are the ones who can facilitate or block the investiture,’ he said, in reference to Pablo Casado, leader of the People’s Party (PP), Albert Rivera, leader of Ciudadanos (Cs) and Pablo Iglesias, leader of Podemos.

After winning the 28 April election with 123 seats, short of the 176 required for an overall majority, Sánchez is being forced to seek additional backing to form a government.

Whilst he has not given up on his original plan to head a minority government with case-by-case support from other parties, it is also still possible that he forms a coalition government with Podemos.

Catalan Independence and the King’s Speech

During the traditional round of meetings held by party leaders with Felipe VI during the week, representatives of the Catalan parties in the Spanish Congress expressed criticism of the king’s response to the 2017 Catalan independence bid..

Laura Borràs, spokeswoman for the pro-independence Junts per Catalunya (JxCat) party, accused Felipe VI of ‘taking sides’ in the televised speech he gave two days after the unilateral independence referendum on 1 October 2017.

Talking to the press after the 45-minute meeting with the king, Borràs said she also expressed her party’s displeasure that the Supreme Court did not allow Jordi Sànchez out of prison to meet the king, and she presented Felipe with a letter from the JxCat head.

‘Perhaps they thought allowing him out of prison to go to La Zarzuela [palace] would damage the Crown’s image, but what damages the image of this democracy is the existence of political prisoners,’ said Borràs, during a press conference after her meeting.

The head of the leftwing En Comú Podem (ECP) party in the Spanish Congress, Jaume Asens, also said he brought up the king’s speech, telling Felipe VI that it had created a ‘climate of hostility’. Without detailing his response, Asens said that the king ‘defended the content’ of his speech.

Asens said that he told the king that the 1 October referendum should be seen as a ‘legitimate public protest’ and he criticised the monarch’s condemnation of the vote two days later as helping to bring about the trial of independence leaders in the Supreme Court.

While not pro-independence, ECP favors a self-determination referendum in Catalonia, and Asens said he passed on a message from jailed activist leader, Jordi Cuixart, urging the king to listen to the ‘Som el 80%’ platform that lobbies for such a vote.

No representative of the Esquerra Republicana (ERC) party attended the round of meetings. It’s leader, former Catalan vice president Oriol Junqueras, is also in prison on trial, while the party calls for Catalonia to be independent.

While the Catalan party representatives said the meetings with the king had been ‘cordial’, the head of the far-right Vox party, Santiago Abascal, denounced the ‘democratic anomaly’ of the king meeting members of parties ‘that have acted like criminal organisations’.

In a press conference following his meeting with the monarch, Abascal regretted that the state has no ‘mechanisms’ for ‘preventing’ these types of situations, and he said he had congratulated Felipe on his ‘historic’ speech on 3 October 2017 to halt the ‘coup d’état’.