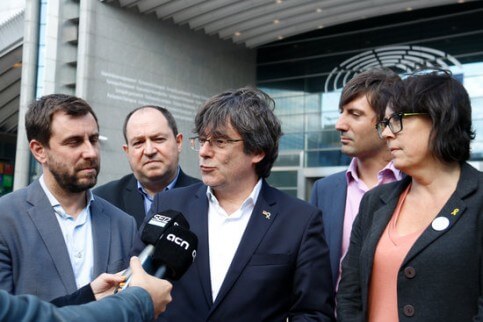 Three of the 14 European Parliament vice presidents have questioned the decision to deny access to the chamber of former Catalan president Carles Puigdemont, who was elected MEP in the 26 May EU elections.

Representatives of the Social Democrats, the Liberals and the Greens have cast some doubt on the move last week, thought to have been taken by the institution’s secretary general, Klaus Welle.

Puigdemont and fellow pro-independence MEP-elect Toni Comín were denied access to the chamber on 30 May when trying to get a temporary registration as representatives in order to move forward with the process to take up their seats.

One of the chamber bureau members, Socialist MEP Sylvie Guillaume, said that the vice presidents ‘were not involved in the decision’.

‘I would also appreciate a clarification of president Tajani on the issue,’ she added in an email responding to a complaint by 10 MEPs.

Her comments reflected the same reaction of another vice president, the Liberal MEP Pavel Telicka.

He said that no one asked him to ‘take a decision on the issue’ and called on president Tajani to clarify that the decision to bar Puigdemont and Comín was not discussed or agreed in the chamber.

‘I hope Mr. Tajani clarifies it, and not only to you,’ he said also responding by email to the complaint.

Talking to the Catalan News Agency, the vice president of the Greens, Heidi Hautala, also expressed a desire that the chamber head, Antonio Tajani, ‘explains in detail’ the reasons for the vetoes in the next meeting of the committee, to be held on 17 June, where she hopes the events are discussed.