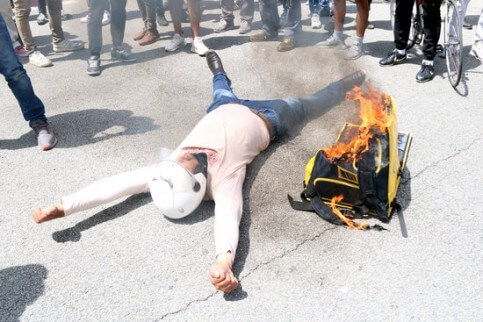 The death of a rider last Saturday who was carrying out an order for the on-demand delivery group Glovo led to protests by couriers outside the firm’s Barcelona HQ, and has now led a major trade union to formally demand an investigation into the company’s employment practices.

The UGT trade union issued an official complaint on Thursday, asking local prosecutors to look into whether Glovo is violating workers’ rights by failing to provide protection for its employees, including formal contracts or access to social security benefits.

‘UGT believes that the company, Glovo, imposes on its workers, through deception and abuse of their vulnerable status, labour conditions and social security conditions that violate the protections afforded to them by law,’ the union said in a statement.

Nepalese national Pujan Koirala was killed in a collision with a garbage truck in Barcelona last Saturday while the 22-year old was substituting a registered Glovo courier. Koirala, who had only arrived in the country a few months earlier, had no work visa.

The company later confirmed that Koirala had not been officially registered as a courier and said that ‘the fact that he carried a Glovo backpack suggests that he could be using a third party’s account’ – something the firm does not officially authorise.

In the same week, a Barcelona court dismissed a suit against Glovo brought by one of its couriers, arguing that the workers are self-employed. Yet, this comes after five other cases in Spain in which courts have ruled that the firm should have employed couriers on contracts.

Yet the practice of sharing Glovo accounts with unregistered workers appears to be widespread, as the company tightly controls the work rate of its couriers through location-tracking algorithms and rewards the most efficient riders with the best jobs.

It is this pressure that the firm’s detractors argue leads to situations like the tragic case of Koirala. In its defence, Glovo says it tries to prevent unregistered substituting by offering mechanisms for reporting suspected cases so it can then cancel the offending accounts.

However, Koirala’s recent death shows that the system is not preventing undocumented service providers from working off the books, without the insurance offered to registered workers, unofficially completing jobs for as little as five euros cash-in-hand.

At the same time, Glovo has raised over 300 million euros since it was founded almost five years ago, including some 150 million euros last month to fund its growth overseas, particularly in Latin America and other parts of Europe.

Meanwhile Deliveroo, the online delivery group, has gone on trial in Madrid, accused of falsely hiring more than 500 of its riders as self-employed instead of regular workers.

The case has been brought to trial by Spain’s social security system, who are claiming 1.2m euros in unpaid contributions. The case is one of several being fought by Deliveroo in various countries .

A similar trial took place in February in Valencia concerning the eastern city’s 200 drivers. But a verdict has not yet been reached.

Two other similar trials will take place this year in Barcelona and the northeastern city of Zaragoza.