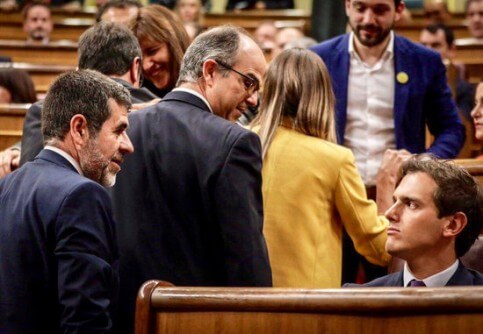 With five jailed Catalan leaders allowed out of prison on Tuesday to take up their seats in the Spanish Parliament – four in the Congress and one in the Senate – the question now is whether the newly-constituted chambers will decide to suspend them.

Though the Supreme Court suspended the five when they were sitting in the Catalan Parliament, enforcing an article in Spain’s criminal code ruling that an individual on trial for rebellion or terrorism can temporarily be suspended until a verdict is reached, it is now up to the Madrid legislature to interpret the court’s ruling.

The People’s Party (PP) and Ciudadanos (Cs) parties have both already announced that they will request the newly-elected committee to suspend them.

Despite support for the jailed leaders from their respective parties, the Cs leader Albert Rivera suggested that allowing them to take up their seats was an affront to the ‘dignity of the Spanish people’.

‘It is no longer a legal matter, it is about four people taking up seats who are charged with attempting a coup, which to me seems to go against the spirit of the chamber and democracy,’ Rivera told the SER radio station on Tuesday morning.

Rivera also tweeted an image of himself giving a ‘cold stare’ towards Jordi Sànchez and Jordi Turull in the Spanish Congress, writing: ‘It is an offence to the Spanish people that they occupy a seat and charge a public salary [those] who are prosecuted for striking a blow to our democracy.’

Laura Borràs, the spokeswoman for the Junts per Catalunya (JxCat) party, to which three of the new MPs belong, said on Tuesday that Jordi Sànchez, Jordi Turull and Josep Rull are ‘fully convinced’ that they will not be suspended.

Speaking outside the lower house as the jailed leaders arrived to be sworn in, Borràs added that if the chamber’s new committee does decide to suspend the MPs, it would show that their ‘rights are fake, and fitting for a fake democracy’.

Meanwhile, Catalan vice-president and high-ranking Esquerra Republicana (ERC) member, Pere Aragonès, warned that ‘suspending those who won the elections in Catalonia would be to suspend the result’ of the 28 April general election.

ERC party leader and former vice-president, Oriol Junqueras, is one of the jailed leaders allowed to attend Congress on Tuesday to be sworn in as an MP, while his party colleague, Raül Romeva, took up his seat in the Senate.

All five of the newly-elected representatives are currently in custody while being tried in the Supreme Court for rebellion, sedition and misuse of public funds over their part in organizing the failed independence bid in Catalonia in 2017.

Batet and Cruz confirmed as Congress and Senate speakers