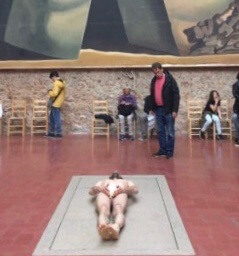 Given his love of the bizarre, it’s quite possible that the great surrealist artist Salvador Dalí would have been delighted by the idea of a naked man performing on his grave.

That is what happened at the weekend, when Adrián Pino undressed and gave a ‘performance’ above Dalí’s tomb in his museum in the northern Catalan town of Figueres.

Coinciding with the 115th anniversary of the artist’s birth, the naked Pino performed a short dance on the tomb before smashing a ceramic object that looked like a large egg.

Sources at the Fundació Gala-Salvador Dalí, which runs the museum, explained that once the performance was over, Pino gathered up the material and left.

Images of the performance entitled ‘Ou’ (Egg) later appeared on Pino’s blog, as well as on YouTube, although the video was taken down for contravening the platform’s rules.

It’s not the first time that Pino has given such a performance. The first was in 2014, in front of Sandro Botticelli‘s famous painting, The Birth of Venus, in the Uffizi Gallery in Florence.

Since then, the artist has performed naked in the Louvre in Paris, at Rome’s Trevi Fountain, in London’s National Gallery, and in Madrid’s Prado Gallery, among others.

The performances are part of the so-called ‘Project V‘, a ‘celebration of the classic nude’, which Pino says aims to ‘recover the mystical sense and ritual of art’.

According to Pino, undressing in the museums is so that ‘my body can achieve the same status as the pieces I undress in front of’.

Spain recalls frigate from accompanying US carrier in Gulf