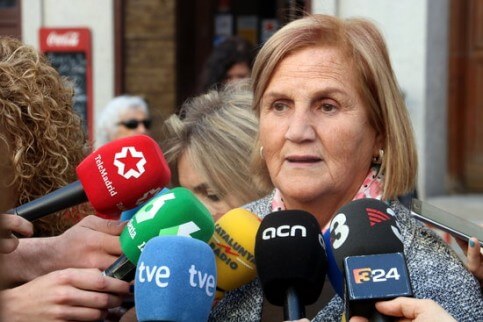 The former Catalan Parliament speaker, Núria de Gispert, has declined the Creu de Sant Jordi (Cross of St.Jordi/George) awarded to her last week, due to a controversy on Twitter.

One of Catalonia’s highest civil distinctions, the Creu de Sant Jordi is awarded each year to a select group of individuals in recognition of their contribution to Catalan culture and identity. This year Lionel Messi has also received the award.

The controversy arose over tweets comparing certain Spanish unionist party politicians to pigs that De Gispert reposted two days after being nominated for the prestigious award.

Despite apologising and deleting the tweets, and receiving support from Catalan president Quim Torra, the calls for De Gispert to be stripped of the distinction continued.

De Gispert has a history of insulting politicians on Twitter, particularly those against Catalan independence, and recently called Pablo Casado, the head of the People’s Party (PP), ‘stupid’.

Yet, her most frequent target is the former Ciudadanos (Cs) party head in Catalonia, Inés Arrimadas, who she often tells to go back to Cádiz (Arrimadas is from Jerez de la Frontera in the Andalusian province).

The former Catalan parliament speaker announced her decision to forgo the distinction in an open letter published in El Punt Avui newspaper on Monday evening.

On Twitter, the government spokeswoman, Meritxell Budó, responded by thanking De Gispert for her letter, saying that her decision to give up the award ‘honoured her’.

Eva Granados, the spokesperson for the Socialist (PSC) party in Catalonia, said it is ‘unfortunate’ that Núria de Gispert declined the top civil distinction over a Twitter row rather than having the honour revoked by the Catalan government.

De Gispert served as Catalan parliament speaker from 2010 to 2015.

Automobile Barcelona gets in gear for centenary edition