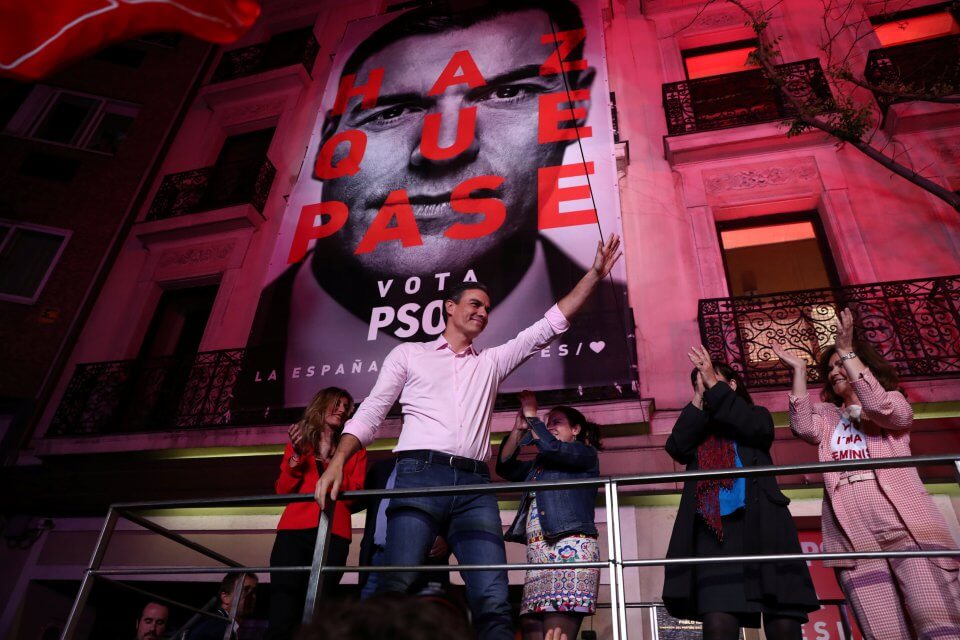 With Spain due to return to the polls on 26 May for the regional, local and European Parliament elections, Prime Minister Pedro Sánchez will be in no rush to form a government possibly until June, and he will let talks of possible coalitions and alliances drag on.

Sánchez‘s PSOE socialist party scored a big win in the general election on Sunday, but it failed to gain an absolute majority in a poll that decimated the right-wing People’s Party (PP) and allowed the far-right Vox party into the Spanish parliament.

Right-wing votes were split among the PP, the Ciudadanos (Cs) and Vox, which won just over 10% of the vote in a country that has officially had no far-right party since the death of dictator Franco in 1975.

Before forming a government, ‘we must wait and see what will happen in the municipal elections … in many regions and of course in the European Parliament,’ Socialist party president Cristina Narbona told Spanish radio.

‘There is no hurry … we are still campaigning,’ she added.

Financial markets were concerned about a new period of instability in Spain, and the country’s benchmark share index was initially the worst performer among leading European indices on Monday.

The PSOE came first in Sunday’s election, winning 123 seats out of 350, close to 29% of the vote – short by 53 of an absolute majority, yet still a great improvement on the 84 seats they secured in the last election in 2016.

The People’s Party (PP) secured just 66 seats compared to 137 in 2016, its worst showing in over two decades. PP, Cs and Vox together have 147 seats, far from the 176-seat majority needed to govern.

In votes from Catalonia, the winners were pro-independence Esquerra Republicana (ERC), with 15 seats and over a million votes. It is the first win of a party in favour of a Catalan republic in a Spanish poll, since the 1930s.

It is unclear whether the MPs-elect will be authorised to leave prison in order to assume their posts, and they could then anyway be subsequently suspended from office whilst still facing trial for the crime of rebellion.

The election was much commented in Europe, where the rise of far-right and populist movements has caused concern.

‘The predominance of progressive forces in Spain and the collapse of the right-wing PP is a message of hope,’ Greek Prime Minister Alexis Tsipras tweeted. ‘Let’s not rush into predicting the dominance of the right in Europe.’

However, Italy’s hardline Interior Minister Mateo Salvini  noted that Vox had gone from ‘0 to 24 seats’, and congratulated its leader Santiago Abascal, as did French far-right leader Marine Le Pen.

Sánchez, who has never been elected before, coming to power in June after ousting PP prime minister Mariano Rajoy in a no-confidence vote, has several options to govern.

He could try to rule on his own as he did during the 10 months that he was in power with the backing of left wing Podemos and smaller regional groups.

The socialists could even try to forego the support of Catalan pro-independence parties, now that it has more seats than before.

All Sánchez would need is for the Catalan MPs to abstain in the second round of an investiture vote when only a simple majority is needed.

Sánchez could also try to form a coalition with Podemos and the Esquerra Republicana (ERC), which together would provide a majority in parliament.

But the pro-independence parties have proven unreliable allies. Sánchez was forced to call the election after they joined the PP and Cs in opposing his 2019 budget.

His reliance on the Catalan pro-independence groups also earned him accusations from the right-wing of being a ‘traitor’, for trying to engage with them to try to ease tensions over Catalonia’s failed secession bid.

This message appears to have fallen flat, with Spaniards flocking to vote on Sunday with a turnout close to 76%, around 10 points higher than in 2016.

Sánchez could also try to cosy up to the centre-right Cs, which won 57 seats. Together, they would form an absolute majority but voters from both parties would not like the move.

‘With Rivera no!’ PSOE supporters chanted outside the party’s HQ on Sunday night, referring to Albert Rivera, the leader of Cs.

The feeling is mutual in the Cs party, whose leader built his campaign on disparaging Sánchez, criticising his attempts to negotiate with Catalan separatists.

Senior Cs leader Inés Arrimadas told Spanish radio on Monday her party could not ally with Sánchez, calling him a ‘public danger, someone capable of anything’ to stay in power.