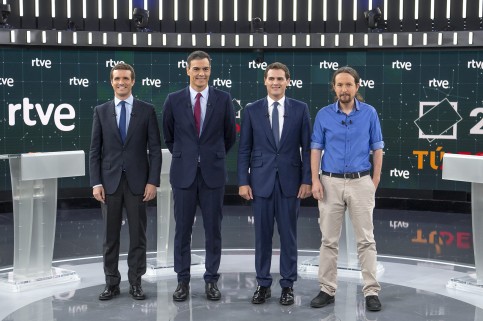 The Catalonia crisis and independence was at the centre of the Spanish election’s first televised debate, on the public TVE channel on Monday evening.

No Catalan pro-independence parties were invited to participate in the event, attended by the Socialist (PSOE) leader and current Spanish Prime Minister, Pedro Sánchez, the leader of the Podemos party, Pablo Iglesias, the People’s Party (PP) president, Pablo Casado, and the head of the Ciudadanos (Cs) party, Albert Rivera.

Casado and Rivera criticised Sánchez several times for ‘reaching agreements’ with the Catalan government and for being backed by pro-independence parties in his successful bid to oust the PP from power in May 2018. Both said Sánchez will ‘pardon’ the prosecuted Catalan politicians in exchange of supports for him to stay in power.

Casado accused the Socialist leader of agreeing ‘with those who defend the “Slovenian way”, those who want a civil war in Spain,’ referring to the Catalan president, Quim Torra, who mentioned the path that Slovenia took to reach independence.

Meanwhile, Rivera called on Socialists ‘not to kneel before those who want to end with Spain’.

‘I don’t think Spain is a nation of nations. I see a nation of equal citizens,’ he added during the debate.

Both of them called the pro-independence politicians ‘members of a coup d’etat’. They appeared close to a post-electoral deal to govern in some stages of the programme, but none of them mentioned the possibility that they need far-right Vox party to have a majority in the chamber.

On the contrary, Podemos‘ head, Pablo Iglesias, urged ‘dialogue, empathy and less insults’ to find a way out in the Catalonia crisis.

‘When you go to a hospital, you are not being asked who you voted, or whether you are pro-independence,’ he said, emphasising the social policies during the whole debate rather than the territorial issue.

Pedro Sánchez called ‘lies’ most accusations by Casado and Rivera, and made clear that ‘there won’t be a [Catalan] referendum’ and ‘Spain won’t break’ if he continues in power. In fact he criticised the People’s Party for letting two referendums and a declaration of independence happen during their time in office.

Sánchez and Iglesias were close to each other especially when debating on social and fiscal policies, but the former didn’t answer to the latter’s question: ‘Will you form a government with Ciudadanos?’

Sanchez also went on the offensive, accusing Rivera and Casado of forming pacts with the far-right Vox, which burst onto the political scene in December regional elections in Andalusia.

Having won 12 seats in Andalusia’s regional parliament, however, the ultra-nationalist and anti-immigration party’s support was key to helping the PP and Cs take power in the southern region that had traditionally been a socialist stronghold.

Sanchez warned that could happen at a national level.

‘I thought that (Donald) Trump wouldn’t win and he won. I thought Brexit wouldn’t happen and it did,’ he said.

‘I thought that in Andalusia the PP, Ciudadanos and the far-right wouldn’t reach agreements and they did.’