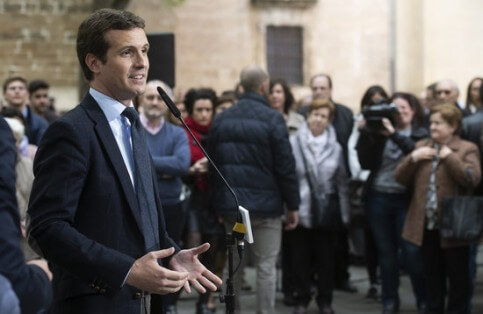 The president of Spain’s People’s Party (PP), Pablo Casado, has said that the Spanish prime minister, Pedro Sánchez, ‘is only right when he amends’ previous decisions, and when he does what the opposition asks of him.

The PP leader referred to the change of decisions by Sánchez, who will finally take part in the electoral debates on Monday, 22 April on TVE, and Tuesday, 23 April on Atresmedia (Antena 3).

Casado said on Friday at an election rally in Pamplona, ​​along with the Navarra coalition ‘Suma’, that Sánchez ‘has been forced to face’ the opposition after ‘generating division’ in the Spanish public broadcaster, and that he has ‘worn out’ the institutions.

The leader of the PP said that finally, Sánchez will have to give explanations about his management and ‘alliances’. Casado has called for the leader of the Spanish government to avoid ‘spectacles’ such as the press conferences of Jordi Sànchez (JxCat) and Oriol Junqueras (ERC) from the prison of Soto del Real.

For his part, the Socialist (PSOE) leader has assured that he will explain his party’s proposals of ‘social justice, coexistence, and the fight against corruption’ during the debates, and he hoped that PP and Ciudadanos (Cs) ‘understand that debating is not insulting’.

Sánchez was ironic about the hours in which the debates will be held, during protected hours so children would not see, and said that the stations have ‘done well’ not to broadcast during these times, taking into account the statements made by Casado and the leader of Cs, Albert Rivera.

‘Sanchez has done everything possible to avoid attending the debates,’ claimed Albert Rivera, leader of the Cs party.

Rivera told a crowd that ‘democracy has finally defeated’ Sánchez and that ‘Spaniards have won, and journalism has too’.

The president of Cs has affirmed that Spaniards ‘deserve candidates who are not afraid’ to debate and criticised Sánchez for having tried to ‘torpedo’ the electoral debates.

Ciudadanos also asked for the resignation of the provisional administrator of RTVE, Rosa Maria Mateo, for the changes in the date of the electoral debate and has accused the head of the Spanish government of ‘not having morals’.

The secretary general of Cs and candidate in the general election, José Manuel Villegas, called the situation ‘shameful’.

7m roses expected to be sold on Sant Jordi’s Day