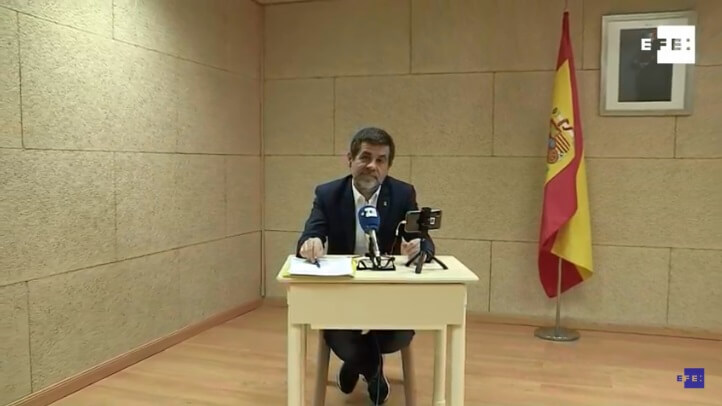 The main candidate in the forthcoming elections for the pro-independence Junts per Catalunya (JxCat) candidacy, Jordi Sànchez, one of the defendants in the on-going Catalan trial, has held a press conference hosted by the EFE press agency from the Soto del Real prison near Madrid.

Sànchez’s press conference is the first with video images since any of the pro-independence leaders were imprisoned in the fall of 2017. He sat at a small table, with the Spanish national flag behind him, and a framed photo of the king of Spain on the wall.

‘After 550 days in prison, this is my first opportunity to speak to Catalan citizens,’ he said shortly after the event began.

Currently facing trial in Spain’s Supreme Court along with 11 other politicians and activists, Sànchez is charged with violent rebellion for leading pro-independence protests when president of the Catalan National Assembly (ANC) ahead of the 2017 referendum.

During his press conference, the activist also talked about the trial currently taking place in Spain’s Supreme Court.

‘I have the certainty that I am innocent, nothing of what we’ve seen in our trial justifies prison.’

Sànchez also called on the Socialist (PSOE) party to engage in discussions to agree an independence referendum in Catalonia.

‘One way or another, I’m sure the Socialists will accept our conditions [an independence referendum] and abide by its historic responsibility – the greatest in Spain’s recent history,’ he said via videolink from Soto del Real prison.

He said his party won’t ask for a referendum as an indispensable condition in order to support Pedro Sánchez‘s bid for a new term as prime minister. Yet afterwards, Sànchez stated they will urge for ‘specific’ steps from the Socialists towards exercising the right to self-determination in order to find a way out of the Catalan crisis.

‘How are conflicts sorted out if not by giving voice to the citizens?’ he asked.

Ahead of the possibility that some Catalan voters go for the Socialist party in order to avoid a potential right-wing coalition including far-right Vox, Sànchez called citizens to back pro-independence forces instead, and especially Junts per Catalunya.

For him, the Socialists might seek a post-electoral alliance with Ciudadanos (Cs), and a government of both would be a ‘risk for Catalonia’. Ciudadanos has pledged to suspend Catalonia’s self-rule if it governs Spain after the 28 April elections.

Morella, the Maestrazgo and beyond, in the steps of the young Picasso