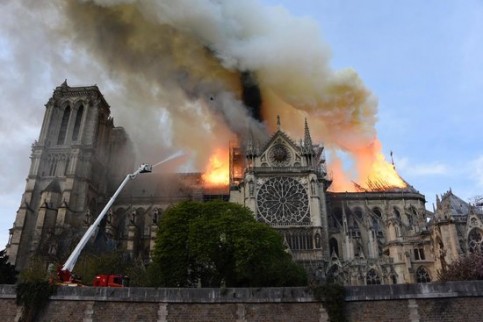 French President Emmanuel Macron has vowed to rebuild the Notre-Dame Cathedral in central Paris, described as the ‘soul of the nation’.

Macron also expressed relief that ‘the worst had been avoided’ in a fire that had threatened the entire building on early Monday evening.

Macron cancelled a planned speech on recent ‘yellow vest’ protests and instead headed to the scene, where he vowed the cathedral would be reborn.

He also described Notre Dame as ‘the epicentre of our life’ and the cathedral of ‘all the French’, whether religious or not.

He declared an international appeal would be launched to raise funds to rebuild Notre Dame, shortly after firefighters declared the structure would survive and the two towers had been saved.

The blaze brought the cathedral’s towering spire and roof crashing to the ground, wiping out centuries of priceless heritage central to French culture and history.

With thousands of Parisians and tourists watching in horror from adjacent streets cordoned off by the French police, the flames had engulfed the building whilst officials tried to save as much the cathedral’s countless treasures, built up over centuries.

The inferno destroyed the roof of the 850-year-old UNESCO world heritage landmark, whose Gothic spire collapsed as flames and smoke billowed into the sky in Paris on Monday evening.

Around 400 firefighters battled into the night to control the flames, declaring in the early hours of Tuesday that it was partially extinguished but completely under control, around nine hours after it broke out.

Spanish Prime Minister Pedro Sánchez tweeted that ‘the fire of Notre Dame is a catastrophe for France. And it is for Spain and for Europe. The flames devastate 850 years of history, of architecture, of painting, of sculpture. It will be hard to forget. France can count on us to regain the grandeur of its heritage.’

The Vatican expressed its ‘incredulity’ and ‘sadness’ over the fire.

US President Donald Trump in a tweet said it was ‘horrible’ to watch the fire but caused controversy by offering advice on how to put it out.

‘Perhaps flying water tankers could be used to put it out. Must act quickly!’ he wrote.

But France’s civil security service, which oversees crisis management in the country, tweeted back at Trump that the use of water-bombing aircraft was not being considered.

The Notre Dame Cathedral is located at the very centre of the French capital and its construction was completed in the mid-12th century after some 200 years of work.