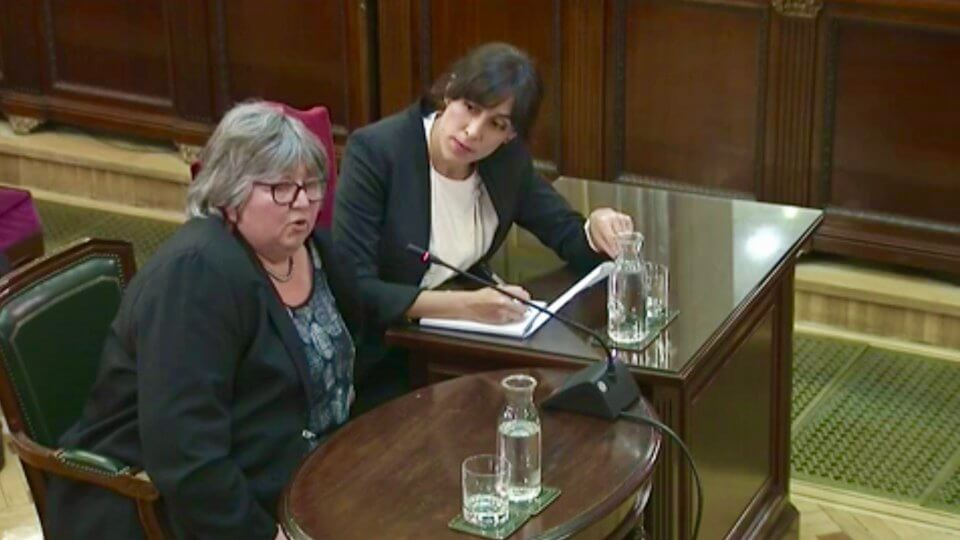 A German politician who was in Catalonia on 1 October 2017 and who witnessed the independence referendum said he was ‘impressed’ by the ‘calm’ attitude of people as Spanish police forcibly entered polling stations to prevent the vote.

Speaking as a witness on the 23rd day in the trial of Catalan independence leaders, Bernhard von Grünberg, at the time an MP for the Social Democratic Party, described the ‘determined discipline’ of people who turned out to vote in the referendum that was declared illegal by Spanish courts.

‘Despite threats,’ said Von Grünberg, who was called as a witness at the request of indicted Òmnium Cultural leader Jordi Cuixart, ‘people went to vote, waited for many hours, were subject to intimidation, and didn’t resort to violence.’

The German politician said he visited ‘several polling stations’ in Barcelona and Girona on the day of the referendum, and described how Spanish police officers ‘broke into polling stations, breaking doors, and clearing people out.’

Von Grünberg also described seeing some people ‘injured by rubber bullets,’ who then had to be taken to hospital but, the German politician told the court, ‘I didn’t perceive any violent attitude’ and said he did not see any Spanish police officer injured.

The German MP denied that he acted as an ‘international observer’ on referendum day: ‘My motivation was to visit Catalonia and talk with all parties. By no means was my priority acting as an observer or validating the vote,’ he told the court.

Von Grünberg also denied representing any political organisations in Germany that might be in favour of Catalonia’s independence, and he even denied that he himself was in favour of such a thing.

With the Catalan political leaders on trial charged with the misuse of public funds, Von Grünberg said: ‘I paid all travel expenses myself. That’s what I normally do when I travel for my work in the United Nations, because I want to remain independent.’

The morning session of the trial ended around midday on Wednesday and started again at 4pm, with a long break because two judges from the Supreme Court, Ana Ferrer and Luciano Varela, are members of the Spanish electoral authority (JEC) and attended a group meeting during that time.

Trial sources confirm that Varela and Ferrer joined the JEC meeting late so as to allegedly avoid the first subject on the roster, about Catalonia, as they insisted they’ve done in previous meetings, so as to avoid a conflict of interests with the trial they are presiding over.

The afternoon session of the trial commenced with a testimony from Helena Catt, the second international expert to take the stand over some academic work she did for the Catalan Public Diplomacy Council (Diplocat), a part-public group set up by the Catalan government, and summoned by the public prosecutor and the solicitor general.

Diplocat was famously shut down with the application of Article 155, Spain’s takeover of Catalan self-government as a response to Catalonia’s declaration of independence.

Speaking as a witness in the Catalan trial [on day 16], the former head of Diplocat, Albert Royo, denied that the role of the international team lead by Catt was to act as observers, but to write a report on the political conflict between Catalonia and Spain.

Today, Helena Catt testified in court that she received money from Diplocat, but she was not hired nor paid to be an international observer. Instead, she was hired by the diplomacy council of Catalonia to carry out a research project within a historical context.

When asked by the prosecutor if she was hired to observe the vote, Catt replied: ‘I was employed to do a research report, which was to cover everything that was happening. Because a vote was one of the things that was happening, we had to watch it.’

She went on to explain that the group she worked with were ’employed by Diplocat in order to conduct research on the ongoing context in Catalonia at that time, within a historical perspective.’

Later in the afternoon session of the trial, three police officers were due to take the stand as witnesses, an officer from the Spanish Guardia Civil and two Mossos d’Esquadra Catalan police officers.

While dozens of Guardia Civil officers involved in operations to halt the 1 October 2017 independence referendum have already testified in the trial, it is the first time Catalan police officers have been called to give testimony.

The Catalan officers were both injured while providing support to the Guardia Civil in a raid of the home of Joan Ignasi Sànchez, who was an advisor to the then governance minister, Meritxell Borràs, who is charged with misuse of public funds and disobedience.