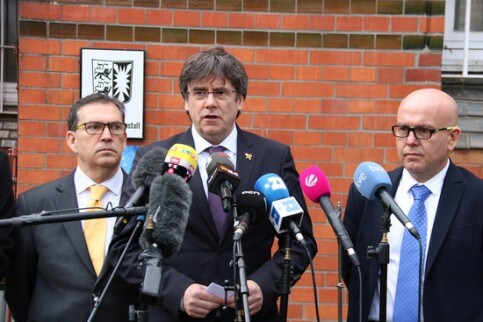 Former Catalan president Carles Puigdemont has requested an ‘independent report’ to compare the legal decisions by German and Spanish courts on the Catalan referendum case.

He announced it on Monday outside Neumünster prison, in Germany, which he visited exactly one year after being jailed there for 12 days starting on 25 March 2018.

Puigdemont’s lawyer, Gonzalo Boye, said they had requested the paper from a team led by Florian Jessberger in the University of Berlin and they believe it will be ready ‘some months after’ the Spanish Supreme Court releases the verdict of the ongoing trial against 12 leaders of the independence bid.

According to Boye, the paper might be important in the event the judicial case is taken to other judicial bodies.

‘I am a free European citizen, I am a free man, with freedom of expression and freedom of movement, but my colleagues and friends are in jail for more than a year and a half facing the worst charge in Spain’s penal code, rebellion,’ said Puigdemont.

‘My former vice president [could be] 25 years in jail, how is it possible, that in the same Europe, in the same free space and the same rule of law, the EU, to face that contradictory responses or attitudes facing the same facts?’

Talking to the press, both Puigdemont and Boye were hopeful that an investigation carried out in Belgium over the tracking device placed on his car ahead of his detention in Germany is successful.

Just before the press conference on Monday morning, Puigdemont visited Neumünster prison and donated 100 Catalan books translated into German to the centre’s library.

Exiled in Belgium since Spanish authorities ousted him following a declaration of independence, Puigdemont was arrested in the German region of Schleswig-Holstein on 25 March 2018, while returning from a trip to Finland.

His detention eventually backfired for Spain’s judiciary, as the Schleswig-Holstein court denied extraditing him for the crime of rebellion – the most serious accusation being leveled against pro-independence leaders.