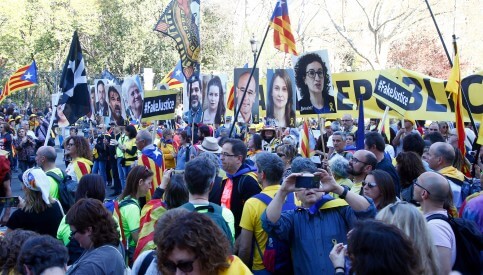 Thousands of people rallied in Madrid on Saturday afternoon against the Catalan independence trial. More than 50 Catalan pro-independence groups and political parties called on people from across Spain to participate in a march for Catalonia’s ‘right to decide’ in the Spanish capital.

It was reported that more than 500 buses travelled from Catalonia to bring protestors to Madrid for the mass demonstration.

Starting officially at 6pm, the protest was set to pass along the Paseo de Prado in the heart of Madrid – under the banners ‘Self-determination is not a crime’ and ‘Democracy is about deciding’.

A few kilometres away, 12 Catalan pro-independence leaders have been on trial for five weeks at the Spanish Supreme Court, facing charges of rebellion, sedition, and misuse of public funds, among others, for their role in the October 2017 referendum, which Spain deemed as illegal.

The Catalan associations behind this weekend’s march – led by Catalan National Assembly (ACN) and Òmnium Cultural, pro-independence movements whose leaders and former leaders are among those in the dock – have long argued that the trial against the 12 Catalan pro-independence leaders cannot be justified and that the Catalan government should have the legal freedom to choose its own sovereign future.

With the rally on-going, some reports state that the organisers have claimed that up to 120,000 people are attending. The Spanish government’s delegation in Madrid, however, has tweeted that the police have estimated the figure to be around 18,000 people.

Franco’s remains to be exhumed in June