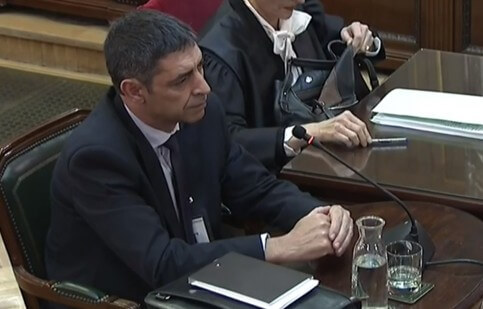 On the 17th day of the Catalan trial, government officials who were allegedly in charge of the campaign to advertise the 2017 independence referendum, deemed illegal by Spain, began giving testimony in the Supreme Court on Thursday morning.

The Catalan government communications secretary, Antoni Molons, refused to give testimony, as he is under investigation in a separate case.

Other witnesses who were hired to print referendum material said they were contacted by someone called ‘Toni’, who prosecutors believe was Molons.

The next witness to take to the stand was Teresa Prohias, the former services director of the Catalan government’s presidency ministry.

Prohias said she knew that Catalan public media had broadcast referendum ads, but she denied knowing if they were funded by the Catalan government.

She added that there was no record of any payments to the Catalan public media for the referendum ad campaign in the government digital database.

The issue of how the 1 October referendum was financed is a key issue in the trial, as a number of the defendants in the court case are charged with misuse of public funds.

However, Prohias told the court on Thursday that the presidency department couldn’t have issued a delivery notice for Unipost to print referendum material because Catalan government finances were under Spain’s direct control.

Josep Lluis Trapero in the spotlight during trial

One of the most highly anticipated witnesses in the trial also took the stand in the Supreme Court on Thursday – the chief of the Catalan police (the Mossos d’Esquadra) at the time of the referendum in 2017, Josep Lluís Trapero.

Trapero defended the role of the Catalan police on 20 September 2017, when Spanish police raided Catalan government buildings to halt preparations for the independence referendum, sparking a wave of protests.

The head of the Mossos police until the Spanish authorities suspended Catalonia’s self-rule following the referendum, Trapero faces charges of rebellion himself (for which the prosecutor is calling for 11 years in prison) and will be tried in Spain’s National Court.

That made his reaction to being summoned to testify in the Supreme Court uncertain, as his involvement in another case means he could have claimed his right not to declare, respond to all questions under cross-examination, or choose to answer only certain questions.

Yet, Trapero has decided to respond to questions from all parties in the referendum case.

Trapero’s name has already emerged on a number of occasions during the trial, in the testimonies of other witnesses, such as former Spanish government members like interior minister at the time, Juan Ignacio Zoido, as well as former Spanish police heads.

According to their version of events, the Mossos under Trapero’s command deliberately did not do enough to prevent the referendum on 1 October 2017, which had been declared illegal by the courts, and they even accuse the Catalan police of ‘facilitating’ the vote.

Yet, former top Catalan police officials, such as Manuel Castellví and Emili Quevedo, have also given testimony in the trial, closing ranks in defence of Trapero and the Mossos, and even declaring that the former chief called on the Catalan government to call off the vote.

ALSO READ: The ‘Jordis’ can now appeal to EU Court of Human Rights

Trapero had an opportunity to explain his actions during the political crisis before he goes to trial in the National Court, the date for which still has to be announced.

Josep Lluís Trapero refuted accusations that the Mossos d’Esquadra facilitated holding the independence referendum on 1 October 2017, and stressed that they always complied with Spanish judicial orders to stop the vote.

‘The Catalan police operation had no objective other than complying with court orders,’ he said.

Trapero admitted to there having been ‘tensions’ with Guardia Civil colonel Diego Pérez de los Cobos, claiming they had different criteria regarding the use of force.

Some 1,066 people were ultimately injured by Spanish police attempts to disrupt the referendum, according to Catalan government figures.

While De los Cobos claimed that Spanish police only intervened after realising that the Mossos ‘had no intention to stop the vote’, Trapero defended that Catalan police actions were part of a broader operation also encompassing Spanish law enforcement, which the latter took the lead in dealing with security issues.

In his testimony as one of the accused, former interior minister Joaquim Forn stressed that while he defended the referendum as a member of the Catalan government, he never told Trapero to disobey court orders.

Trapero confirmed his former superior’s account of the facts. Yet, he acknowledged that some comments Forn made ahead of the referendum – for instance, he famously claimed that the Mossos would allow the vote to take place – made him ‘uncomfortable’ and deemed them as ‘irresponsible’.

In a meeting ahead of the 1 October referendum, Trapero also said that he requested Carles Puigdemont call off the vote and follow court orders, as this is what the Catalan police was planning to do.

‘The Catalan police urged the government to comply with legality and court orders, because that’s what we were going to do,’ Trapero told the court, and said that ahead of the vote the Catalan police stressed to government that they had ‘public order’ and ‘safety’ concerns – as more than two million people were expected to take part in the vote, and some 15,000 police officers had the mission to stop it.

Towards the end of his testimony, Josep Lluís Trapero also said that the Catalan police were ready to arrest former president Carles Puigdemont and his ministers after the declaration of independence, should the courts have ordered it.

The former head of the Mossos said that as the ‘legal implications’ of the declaration of independence were unclear, he said he told his officers to be prepared to follow orders two days prior to the declaration.

The parliament passed a resolution declaring the independence of Catalonia on 27 October, following overwhelming support for a Catalan republic in the referendum held on 1 October, which the Spanish courts had declared illegal.

Franco’s remains to be exhumed in June