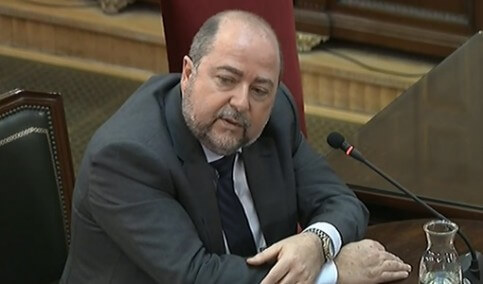 In the days leading up to the independence referendum on 1 October 2017, none of the three police forces charged with halting the vote expected any violence.

That is according to the head of information of the Catalan police (the Mossos d’Esquadra) at the time, Manuel Castellví, who finished giving testimony in the Supreme Court on Monday morning, on the 14th day of the Catalan trial, and now in its fifth week.

Castellví began testifying in the trial of Catalan independence leaders on Friday, but his court appearance had to be cut short and was adjourned until today.

According to the former police official, the Catalan government called for ‘peaceful and civilised’ behaviour during the 1 October referendum.

He also said that pro-independence groups, whose leaders from 2017 are in the dock, ‘always called for non-violent rallies, and there were never any incidents at their events’.

Castellví’s comments contrasted with what he said on Friday, when he told the court he had warned the government of concerns about an ‘escalation of violence’ on the day of the vote.

According to the official, the Catalan government thought that the referendum would be ‘like a normal election,’ and he said he urged them to comply with court orders to stop the vote.

Castellví was also critical of Catalan and Spanish police heads for not seeing the ‘magnitude’ of the public response: ‘We failed, we didn’t foresee the major social movement behind the referendum,’ he said.

The role of the Catalan police during the independence referendum is set to be in the spotlight in this fifth week of the trial against officials who called the vote despite Spain’s opposition.

Josep Lluís Trapero, the former chief of Catalonia’s police body, the Mossos d’Esquadra, has been summoned to speak in Spain’s Supreme in Court on Thursday afternoon, in what is set to be one of the most crucial testimonies in the Catalan independence trial.

Trapero is under investigation in a separate case, accused of not doing enough to stop the vote, which had been deemed as illegal by Spanish courts.

On Monday, former Mossos officials stressed that the Catalan police urged the government to call off the referendum.

Catalan police officials tried to convince the government to call off the independence referendum on 1 October 2017, the official responsible for planning and security at the time of the vote, Emili Quevedo, told the Supreme Court on Monday morning.

Quevedo said that the former head of the Catalan police, Josep Lluís Trapero, met with top government officials on two occasions ‘to persuade them not to hold the referendum’.

According to Quevedo, there was ‘concern’ among the Catalan police leadership over the ‘climate of tension and over security’ on the day of the vote that had been ruled illegal by Spanish courts.

‘We knew there’d be a lot of people and that there could be security problems in some potential confrontations between those for and against the referendum,’ he said

However, the former official said that the Catalan president at the time, Carles Puigdemont, refused to call off the referendum despite the requests by the Catalan police.

Quevedo also countered suggestions that the Catalan police had not done enough to stop the vote: ‘A law enforcement body cannot use its entire staff for only one operation,’ he said.

According to Quevedo, on a normal election day, some 2,500 to 3,000 officers are deployed for the vote, but on 1 October some 7,800 officers were deployed.

‘For the first time’ in his police career, Quevedo added, some officers who never normally take part in operations were deployed for the 1 October vote.

The former official stressed that even if every Catalan police officer had been deployed for the referendum operation, it would not have prevented the vote from taking place.

‘Unfortunately complying fully with the judicial orders (to stop the vote) was not possible – the maximum number of polling stations possible were closed down,’ said Quevedo.

Three employees of Unipost, a postal service linked with the independence referendum, testified on Monday afternoon in the 14th day of the Catalan trial, and now in its fifth week.

The first one who gave testimony was Albert Planas, former head of production of the company in Catalonia and the Balearic Islands.

Unipost was hired by the Catalan government to send out referendum material ahead of the 2017 vote.

‘We didn’t know that they were letters for the referendum, only that they were ordered by the Catalan government,’ Planas told the Supreme Court on Monday.

A number of the leaders on trial are accused of misuse of public funds in financing the referendum, but Planas told the court he knew nothing of the order’s payment details: ‘Dealing with bills was not my responsibility in Unipost,’ he said.

His former colleague, Francisco Juan Fuentes, who was Unipost’s head of distribution, also said he knew little about the government’s order, and only learned that the letters contained referendum material when Spanish police seized them after raiding the Unipost offices.

Fuentes also said that Guardia Civil officers entered Unipost’s offices without a court order, and that, in any case, the company ‘blocked the delivery because the letters did not come with a delivery note’.

Two Spanish Guardia Civil officers will take to the stand on Tuesday, including the policeman who made some key reports used in the independence trial.

The testimonies of Spanish police officers could shed some light on the operation to stop the referendum, which left more than a thousand people injured, according to Catalan government figures.

On Wednesday morning, the role of Catalonia’s foreign affairs ministry during the independence bid will be under scrutiny, with former officials expected to give their testimony.

Witnesses will include Albert Royo, the former head of the Public Diplomacy Council of Catalonia (DIPLOCAT), as well as Amadeu Altafaj, the former representative of the Catalan government in Brussels.

In the afternoon, the head of an international team of experts charged with overviewing the referendum, Helena Catt, will speak as witness.

Assessing the political impact of the referendum, she said that ‘the results must be taken into account in the international community,’ but described the vote as a ‘political mobilisation.’

Along with Trapero, the key witness on Thursday will be Josep Maria Jové, the right-hand man of the Catalan vice president Oriol Junqueras in 2017. He is thought to have had a leading role in the preparations for the independence vote.

Jové was arrested in a series of police raids on September 20, 2017, sparking a wave of protests in Barcelona.

A notebook allegedly seized during the operation became a crucial piece of evidence for prosecutors investigating a ‘strategic committee’ encompassing politicians and activists  – many of whom are sitting in the dock as defendants – and which aimed to achieve Catalan independence.