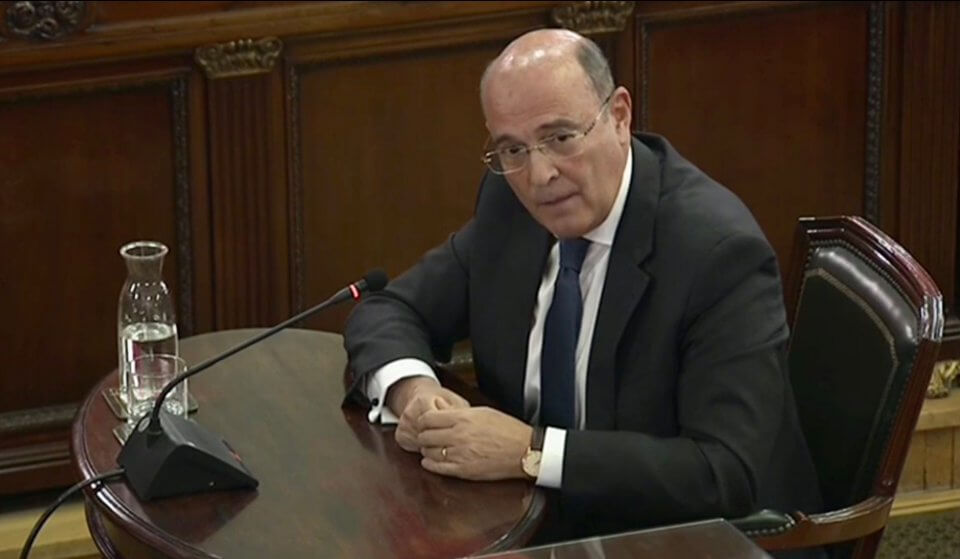 Some pro-independence protests were peaceful, but ‘others were violent, with harassment, and objects thrown,’ Enric Millo, the Spanish government delegate in Catalonia during the 2017 political crisis, told the Supreme Court on Tuesday morning, the 11th day of the Catalan trial.

The testimony of the former delegate comes in week 4 of the Catalan trial, when the efforts by the Spanish police to stop the referendum are in the spotlight, after former prime minister Mariano Rajoy and his ministers denied any role in the operation.

According to Millo, the pro-independence camp encouraged protests that led to ‘dozens of actions of harassment, intimidation and violence’ from September to mid-November, soon after direct rule was imposed on Catalonia.

Appearing as a witness in the trial of Catalan independence leaders in Madrid, the former delegate also said that police officers following court orders were harassed by pro-independence supporters.

‘Wherever the judicial police acted, there was a group of people harassing, shouting, pestering, threatening them, and in some cases there were attacks on vehicles and people to impede the judicial work,’ he said.

The issue of whether violence was part of the independence bid in 2017 is crucial to the trial, as many of the defendants are accused of rebellion, a charge that requires the use of violence, and an accusation they all deny.

‘They used to say the demonstrations were festive events, but the calls [by the pro-independence camp] were to defend the institutions, which means they assumed they were being attacked,’ said Millo, who added: ‘We could all see the damage to police cars on 20 September 2017.’

Later, defence lawyer Xavier Melero asked him: ‘Does the fact that there were no arrests on 20 September match with the violent climate you’ve described?’

Enric Millo then responded: ‘We should ask Catalan police officers [the Mossos d’Esquadra] who were present that day.’ Millo also added that in that police force, ‘the political narrative prevailed to the professional one’ during the independence bid.

As for the referendum on 1 October 2017, Millo says that in early September he ‘sent letters to all Catalan mayors, school heads, and social and economic entities reminding them of their obligation to impede the vote.’

Millo also confirmed that ‘the court ordered that if there were any public centres on October 1 operating as polling stations, they had to be raided, electoral material had to be confiscated, and the centres had to be evacuated and closed down.’

‘I made a statement on referendum day shortly after 9am, informing the public that there was a judicial order obliging police to enter centres, confiscate electoral material, and leave,’ added Millo.

The conduct of Spanish police drafted into Catalonia to stop the vote is also a key issue in the trial, as hardline tactics used by riot officers left hundreds of people injured.

After the operation to stop the vote, Millo apologised for the conduct of the police, but held the Catalan government responsible for going ahead with a vote on independence that had been declared illegal by the Spanish courts.

ALSO READ: The ‘Jordis’ can now appeal to EU Court of Human Rights

Asked about his apology, Millo told the court: ‘I said the only person responsible for the police violence was [then president Carles ] Puigdemont. And on behalf of him, I apologised.’

Referring to the events on 1 October, the former Spanish delegate said that at noon he issued another statement ‘asking the Catalan president to call off the referendum to avoid greater chaos’.

However, Millo explained that ‘at 1pm, Puigdemont in a statement didn’t call off the vote, but welcomed people defending ballot boxes and schools, as if they were being attacked.’

‘I found these remarks irresponsible,’ he added.

Millo also told the court that on the day of the vote, the then-home affairs minister, Joaquim Forn, who is also on trial, called him to stop the police operation. ‘There’s a very easy way to stop it: calling it off,’ Millo said he told him.

After the referendum, the result of which was in favour of a Catalan republic, the Parliament went on to issue a resolution declaring Catalonia’s independence, on 27 October, after which direct rule was imposed.

Some defendants have played down the significance of the declaration and asked on Tuesday whether he saw the declaration as ‘symbolic,’ Millo replied: ‘No one in Catalonia thought [so]. At that time, no one thought it was a joke.’

A defence lawyer subsequently asked Millo, if, on 27 October, ‘when the supposed declaration of independence occurred,’ if he had been ‘officially informed of it.’ Millo, in turn, said: ‘No, I guess I was not relevant anymore in the supposed ‘new state’.’

Millo was meant to have spoken in court on Monday morning, but the session was delayed by the long testimony of the former Spanish secretary of state for security, José Antonio Nieto.

Munté stepped down from the government in July 2017 – only three months before the referendum.

In the trial, she argued that he had too much ‘workload’ and had had a tough year after the loss of her father earlier in the year to explain her decision.

At the prosecutor’s request, she denied stepping down for disagreement with the roadmap towards an independence referendum.

The former official in charge of the Catalan home affairs department during the period of direct rule, Juan Antonio Puigserver, also gave his testimony in the Catalan trial from 4pm.

Spanish police officers acted with ‘exquisite proportionality’ when using force to stop the independence referendum on 1 October  2017, he told the Supreme Court.

He added that Spanish police officers gave up on seizing referendum material from polling stations ‘on several occasions’ due to the ‘hostility and aggressiveness’ of people there.

Although a thousand people were injured on the day of the referendum, with Spanish police using hardline tactics to disrupt the vote, Pérez de los Cobos called the operation ‘meticulous, professional, and proportional.’

‘We were sitting in front of those who had called [a referendum] deemed illegal and which we had to stop,’ he said.

‘We told [former president Carles] Puigdemont that nothing would happen if he called off the referendum, but he didn’t do it,’ Pérez de los Cobos told the court.

‘The relationship with Catalan police chief Trapero was always difficult,’ said Pérez de los Cobos, who added that Trapero’s plan for 1 October ‘would not prevent the referendum.’

‘It looked more like a plan for an election than an illegal vote,’ he added.

The colonel also said that Trapero thought ‘it would be difficult to close down all polling stations,’ while he warned that the police operation could end up inflicting ‘greater damage than that to be avoided.’