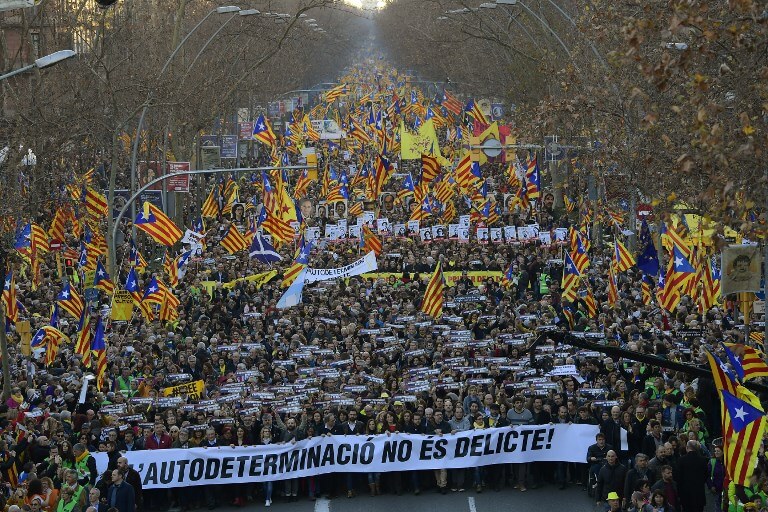 Over 200,000 people marched through Barcelona today against the high-profile trial of Catalan independence leaders that started this week, according to Barcelona’s Guàrdia Urbana police. Organisers claim that 500,000 have taken part.

‘Self-determination is not a crime,’ read one banner at the front of the protest led by Catalan president Quim Torra.

The trial of 12 Catalan independence politicians and activists over their role in the 2017 attempt to break Catalonia from Spain started on Tuesday at Madrid’s Supreme Court.

They face up to 25 years behind bars on charges of rebellion and other offences for pushing an independence referendum in October 2017 in defiance of a court ban, and for a brief declaration of independence.

The independence bid sparked Spain’s deepest political crisis since the transition to democracy in the 1970s after the death of dictator Francisco Franco.

Violence or no violence?

Independence supporters and the defendants’ lawyers maintain they are on trial for their ideas and for political dissidence.

Prosecutors, though, insist the separatist leaders and activists are being tried for their actions and not for what they think.

‘What’s happening is really sad. It’s a political trial, full of manipulations to sentence them for something that isn’t a crime,’ said Jesus Rodriguez, head of a group of ‘castellers,’ Catalonia’s famous tradition of giant human towers, at the Barcelona protest.

‘They just want to lock them up and as they know that voting isn’t a crime, they’re inventing violence that never happened,’ added the 48-year-old.

Many Spaniards support the trial, shocked by the actions of Catalonia’s regional executive in October 2017.

Controversy, however, has swirled over the charge of rebellion.

Under Spanish law, rebellion is defined as ‘rising up in a violent and public manner’. But opinion is divided over whether the independence bid was violent.

At the trial on Wednesday, prosecutor Fidel Cadena said ‘what is penalised … is behaviour carried out over time which aimed … at the subversion and rupture of the constitutional order, calling for violent methods through the use of the masses as human shields’ against police.

Supporters of independence deny the accusation of violence.

They instead condemn a police operation to shut down the referendum, which saw voters beaten with batons and dragged away from polling stations, images of which were seen in media around the world.

Oriol Junqueras, the main defendant of a trial that is scheduled to last three months, also rejected any claims of violence.

‘If you read, listen and observe our actions, no one could have the least doubt that we reject violence,’ he said at his hearing on Thursday.

Called by a range of pro-independence organisations, the demonstration aimed to protest ‘intolerance, injustice and those who want to infringe fundamental rights,’ in the words of Òmnium Cultural‘s vice president, Marcel Mauri. The organisation president Jordi Cuixart is one of the 12 leaders on trial in Madrid.

As well as the Catalan independence flags ‘esteladas,’ and the colour yellow, worn in support of leaders in pre-trial prison and exile, the protest saw signs in reference to the trial, with signs reading such messages as ‘I too want to testify.’

The general atmosphere of the protest early on – which by 5pm was already filled with people – was a celebratory one, despite sombre moments in which pro-independence officials spoke against the trial and in support of Catalan leaders.

Under the slogan ‘Self-determination is a right, not a crime,’ the rally began at 5pm in Barcelona’s Plaça Espanya square, going all the way down Gran Via avenue to Plaça Universitat Square.

The march was called by the pro-independence Catalan National Assembly (ANC) and Òmnium Cultural organisations, as well as the political parties Junts per Catalunya, ERC, CUP and Catalunya en Comú, among other groups.