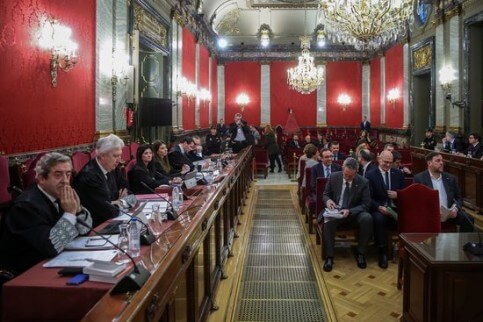 The trial of Catalan independence leaders began on Tuesday 12 February, and for the next few months, 12 politicians and activists will be tried for calling a referendum and declaring Catalan independence in October 2017, despite opposition from the authorities in Madrid.

Catalan independence leaders accused of rebellion for trying to make their region independent from Spain launched their defence on Tuesday on the first day of their long-awaited trial.

Sitting on benches in the ornate chamber of Madrid’s Supreme Court, the defendants faced a row of judges and a Spanish flag in proceedings broadcast live on television.

They denounced the ‘violation of right to defence’ and some lawyers requested the ‘nullity’ of the proceedings.

The lawyer accused authorities of violating the defendants’ fundamental rights.

‘I ask for the trial be temporarily suspended due to the violation of the right to defence, as the defence teams don’t have access to all the evidence admitted by the Supreme Court,’ said Jordi Pina, lawyer of Jordi Turull, Josep Rull, and Jordi Sànchez.

Xavier Melero, the lawyer of Joaquim Forn, denounced his client being tried at the Supreme Court while the Catalan police leadership faces trial at Spain’s National Court. ‘Mr Forn is not here as a mere member of the Catalan government. He is here because he is thought to have had the capacity to control the Catalan police [the Mossos d’Esquadra].

The lawyer of Jordi Cuixart and Carme Forcadell believe there is evidence to request the ‘nullity’ of the trial.