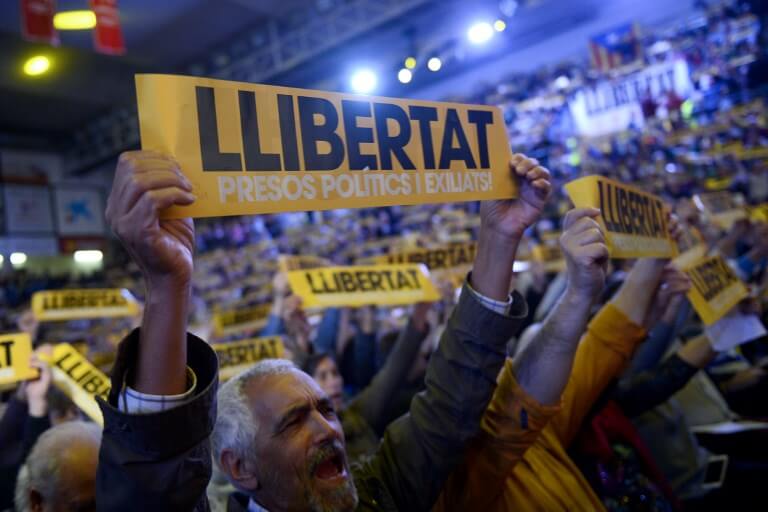 With vigils and concerts outside prisons, Catalan independence supporters for months have shown their backing for 12 leaders who go on trial on Tuesday over their bid to break the region away from Spain.

Now that the highly anticipated trial is finally about to get underway at Spain’s Supreme Court in Madrid, they have vowed to step up their protests in another show of solidarity.

While just 12 leaders will sit in the dock over their role in the failed 2017 independence bid, many Catalan pro-independence supporters feel they are also being put on trial for having taken part in a banned referendum held on 1 October that year.

‘I’m a lifelong separatist and I voted on October 1, it’s as if I was being tried,’ said retired teacher Eugenia Fernandez at a recent vigil held for the detained Catalan leaders at the picturesque Plaza de la Vila de Gracia square in Barcelona.

‘We’re here because of the huge injustice that our government is in jail or exile for doing what we asked them to do – fight to set up a Catalan republic,’ the 67-year-old said.

The vigil Fernandez took part in has been held every Monday evening for the past 15 months at the square in Gracia, a bohemian district of the Catalan capital which is also its most pro-independent.

People held up large black and white images of the Catalan leaders, as well of those who fled abroad after the failed independence bid, along with the word ‘freedom’ in Catalan and English.

Only the chime of a clock on top of an imposing 19th century tower in the centre of the square broke the silence.

Nine of the leaders have been charged with rebellion, with some also accused of misuse of public funds. They have all been in pre-trial detention for months, some of them for more than a year.

‘This is a reaction against the brutality of this trial, which is not against a few people but is instead against Catalan political feeling,’ said award-winning Catalan writer Ramon Solsona, who read some poems at the vigil.

Similar events have been held across Catalonia, where the leaders have obtained near-martyr status among many separatists who see them as ‘political prisoners’.

The 12 defendants face prison sentences of between seven and 25 years if convicted, with former Catalan vice president Oriol Junqueras at risk of the longest sentence.

Catalonia’s president at the time of the secession bid, Carles Puigdemont, is not among those on trial since he moved to Belgium where he regularly receives visits from top Catalan separatists.

With Catalan pro-independence parties divided over strategy – some calling for more civil disobedience while others favour dialogue with Spain’s central government – the cause of the jailed Catalan leaders helps keep them united.

‘Judging all of us’

Polls show the region remains split over the issue of independence, and separatist protests – which in the past drew over a million people – appear to have lost strength.

Pro-independence groups have responded by holding smaller events to show support for the detained leaders.

The defendants were moved from prisons in Madrid to jails in Catalonia shortly after Socialist Prime Minister Pedro Sánchez came to power in June in what was seen as a goodwill gesture.

Since then pro-independence supporters have gathered regularly outside of the Catalan jails where they were being held, holding concerts, camping outside overnight and forming human pyramids, called ‘castells’, a Catalan tradition.

Pro-independence parties and associations have vowed to stage a wave of protests during the trial, starting with demonstrations on 12  and 16 February in Barcelona, followed by a general strike across Catalonia on 21 February. A major protest is scheduled in Madrid on 16 March.

Protests are also planned outside of Spain, in Berlin, Paris, Brussels and London.

‘In the end, they are judging all of us. They are judging an entire people and its right to self-determination,’ Catalan president Quim Torra said last month at an event with relatives of the jailed leaders.