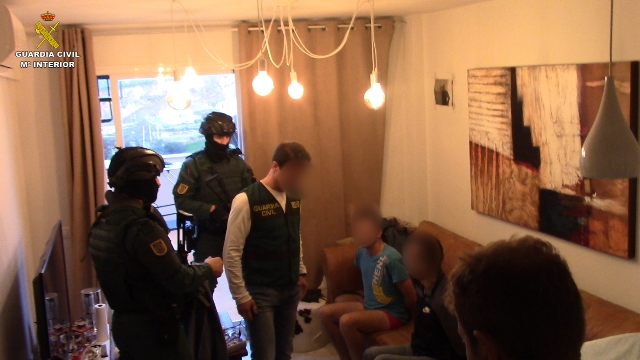 Spain’s Guardia Civil police have broken up a violent branch of Italy’s Camorra crime group, which they believe stole hashish from rival drug traffickers in Spain and then transported it to Rome in motorhomes.

The authorities arrested 14 people in the operation, which had ‘completely broken up’ a branch of the Camorra’s ‘Marranella’ clan which operated on Spain’s southern Costa del Sol, a police statement said. Another seven people are under investigation, it added.

Police said the group obtained most of the hashish which it then sold on the streets of Rome through violent thefts from other drug traffickers in Spain.

The group also bought hashish in Spain with the aid ‘of a group of British citizens’ based in the southern province of Cadiz.

‘To carry out these thefts, members of this organisation used extreme violence, not hesitating to use firearms to kidnap other area drug traffickers,’ the statement said.

The drugs ‘were transported to Rome by road, hidden inside rented motorhomes, with the trip carried out usually by a man and a woman hired by the organisation, to appear as if they were a couple on vacation and not raise suspicions during any police controls.’

The organisation was led by a father and his two sons who belonged to the Camorra’s ‘Marranella’ clan.

The 14 suspects who were arrested include British, Italian, Spanish, Romanian and Dominican nationals. Some were wanted fugitives in their home countries.

The authorities seized half a tonne of hashish in Spain, Italy and France as part of the operation, which was carried out in cooperation with Italian police.

The Camorra, which is based in the Naples area, is one of Italy’s three main organised crime groups, along with Sicily’s Cosa Nostra, commonly known as the mafia, and the ‘Ndrangheta, centred in the Calabria region.

Camorra bosses refer to Spain’s Mediterranean coast as ‘Costa Nostra’, or ‘Our Coast’, alluding to the ‘Cosa Nostra’, according to Italian journalist Roberto Saviano, a specialist on the Naples criminal underworld.