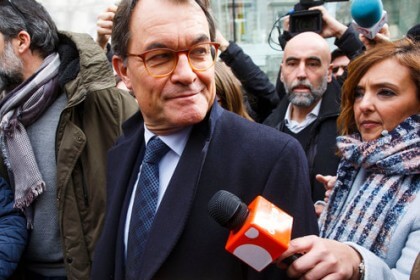 Spain’s High Court of Justice in Catalonia (TSJC) has confirmed the sentence against former Catalan president Artur Mas, banning him from public office until February 2020 for organising a non-binding vote on independence on 9 November 2014.

The sentence issued by the high court and confirmed by Spain’s Supreme Court also affects Mas’ former ministers, Joana Ortega and Irene Rigau, who have been barred from taking office until October and July, respectively.

With the sentences effective from 23 January this year, all three former officials will also have to pay fines, amounting to 36,500 euros in the case of Mas, 30,000 euros in Ortega’s case, with Rigau facing a fine of 24,000 euros.

Mas and his former ministers were convicted of disobedience for defying a ruling by Spain’s Constitutional Court, which declared the vote in 2014 to be unconstitutional and therefore illegal.