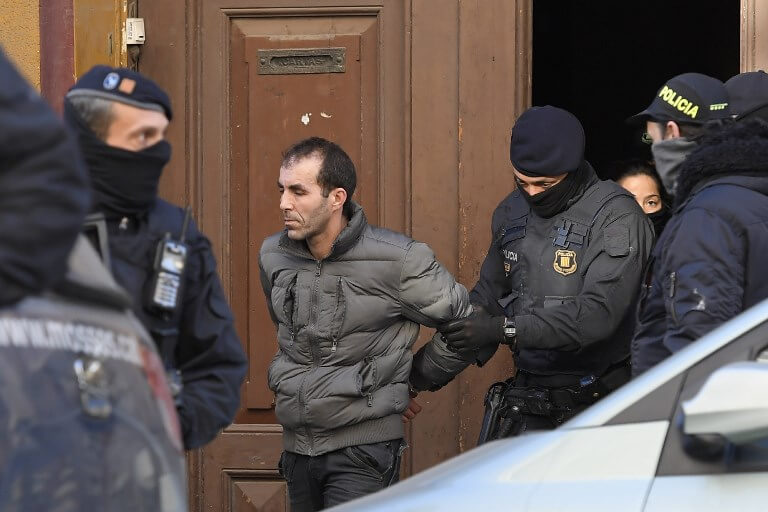 The Catalan police, the Mossos d’Esquadra launched a counter-terrorism operation in Barcelona and a nearby city on Tuesday against an alleged militant Islamist cell suspected of plotting an attack, local officials said.

Officers arrested 18 people in Barcelona and Igualada, 60 km west of the Catalan capital, as part of the raid, the Mossos police said in a statement.

Five suspects were arrested for terrorism offences while the rest allegedly committed theft, drug trafficking and other crimes to help support the cell’s activities.

The five ‘were in an advanced process of radicalisation with the aim to attack,’ the statement said.

‘The group defended the doctrine and actions of the jihadist movement and they consumed a significant amount of publications that advocated the theses of Daesh,’ it added, using the Arabic acronym for the so-called Islamic State group.

The authorities said the suspects were constantly under surveillance and there was never any danger to the public.

The suspects ‘intended to carry out an attack’, but police work ‘ensured that at no moment did they have the capacity to carry out these actions,’ Catalan interior minister Miquel Buch said.

Over 100 officers were taking part in the ‘counter-terrorism operation’ launched by the Catalan police force at 6am, the Mossos stated on Twitter.

Police stormed five properties in Barcelona and a sixth in Igualada as part of the operation.

Armed officers, wearing black ski masks, stood guard outside a building in central Barcelona as boxes and bags were removed from a flat, according to an AFP reporter on the scene.

The operation was ordered by Spain’s High Court (the Audiencia Nacional), which is charged with terrorism investigations, and it is focused on ‘the crimes of terrorism, public health offences and organised crime’, the Mossos said.

One of the suspects was arrested in the Catalan town of Igualada while the rest were detained in Barcelona.

The five people arrested for terrorism offences are aged 33-44. Three are from Algeria, while the others are from Libya and Iraq.

The rest of the suspects had Algerian, Spanish, Egyptian, Moroccan, Lebanese and Iraqi citizenship.

Barcelona was on alert last month after the US State Department warned off the risk of a terrorist attack in Spain’s second-largest city over Christmas.

Spanish media reported at the time that the authorities were looking for a Moroccan man with a licence to drive buses who could try to drive a bus or other large vehicle into crowds in Barcelona.

On 17 August 2017, a van rammed crowds on Barcelona’s La Rambla boulevard, killing 14 people and injuring over 130 others.

The 22-year-old Moroccan driver then stole a car after killing the driver and fled.

Several hours later five of his accomplices mowed down pedestrians on the promenade of the seaside resort of Cambrils, south of Barcelona, before stabbing a woman to death.

The Islamic State group claimed responsibility for the attack, Spain’s worst since the Madrid train bombings in 2004 when 191 people died and more than 1,800 were injured.

Spain has had its terrorist alert at the second-highest level since 2015.

Catalonia has a long history of Islamist militant activity. A member of the Algerian Armed Islamic Group (GIA) was uncovered in the region in 1995.

Mohammed Atta, who flew a passenger plane into a tower of the World Trade Center on September 11, 2001, in New York, spent time in Catalonia shortly before the attacks.

In 2008, a plot targeting Barcelona’s metro system was foiled when it was in its advanced stages.

In a separate operation, police arrested a 27-year-old Moroccan national in the southern province of Malaga who allegedly used several social network profiles to express his allegiance to the Islamic State group.