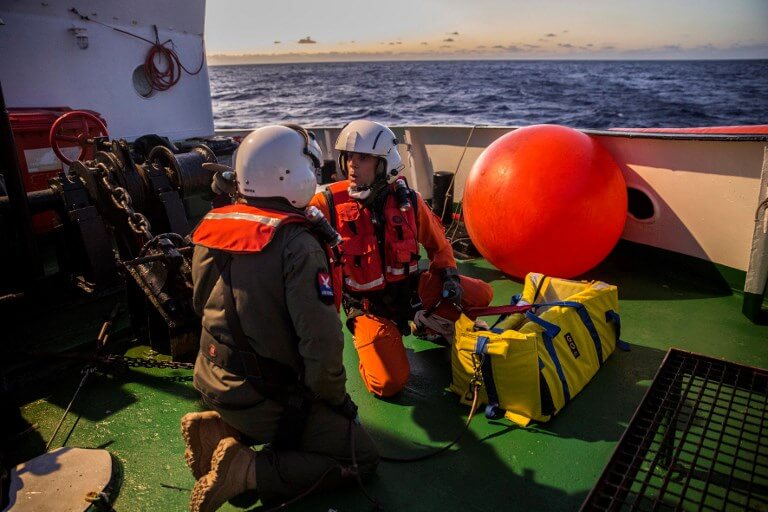 Spain on Saturday authorised a ship carrying hundreds of migrants rescued off Libya to sail to its waters after Italy and Malta refused to receive them.

The Spanish coastguard ‘due to the refusal or lack of response from the nearest ports, has authorised (the ship’s) movement to Spanish territorial waters,’ a government statement said, with the migrants expected to spend Christmas at sea.

Libya, France and Tunisia did not respond to a request from Spanish NGO Proactiva Open Arms to disembark the 311 men, women, children and babies, Spain said, after Italy’s hard-right Interior Minister Matteo Salvini said the migrants were not welcome.

‘My answer is clear: Italian ports are closed!’ Salvini tweeted. ‘For the traffickers of human beings and for those who help them, the fun is over.’

The NGO said a Maltese coastguard helicopter had taken a woman and her baby born on a Libyan beach three days ago who were among those rescued at sea by the Open Arms.

The Maltese government confirmed rescuing a newborn baby boy and his mother, 23.

Proactiva Open Arms said on Friday that it had rescued more than 300 migrants from three vessels in difficulty, including men, women – some of them pregnant – children and babies.

NGO spokeswoman Laura Lanuza told the AFP news agency that the boat was heading for Algeciras, near Gibraltar. Journey time will depend on the weather but take ‘five to six days’, she said.

The NGO’s sailboat Astral is headed from Badalona near Barcelona to the Open Arms with food supplies, Lanuza said.

The NGO posted a video of some of those rescued ‘from a certain death at sea. If you could feel the cold in the images, it would be easier to understand the emergency. No port to disembark and Malta’s refusal to give us food. This isn’t Christmas.’

After announcing the closure of Italian ports, Salvini tweeted a photo of the tortellini and sausage he had for lunch.

Open Arms’ founder Oscar Camps tweeted back at Salvini that ‘your rhetoric and your message will, like everything in this life, end. But you should know that in a few decades your descendants will be ashamed of what you do and say.’

The vessel started patrolling the Mediterranean with two other boats run by migrant aid groups off the Libyan coast in late November.

This area of the Mediterranean has been the most deadly for migrants attempting the crossing to Europe.

German NGO Sea Watch meanwhile tweeted that it had rescued another 33 migrants in difficulty, and that it was appealing for a port to be allowed to dock.

More than 1,300 migrants have perished trying to reach Italy or Malta since the beginning of the year, according to the International Organisation for Migration (IOM).

Aid groups have been sending rescue vessels into these waters despite vocal opposition from Salvini.

Accusing the groups of acting as a ‘taxi service’ for migrants, he has denied them access to Italy’s ports. Malta too has been increasingly unwilling to host rescue vessels.

A United Nations report on Thursday said that migrants and refugees are subjected to ‘unimaginable horrors’ from the moment they enter Libya, headed for the Mediterranean and Europe.

‘There is a local and international failure to handle this hidden human calamity that continues to take place in Libya,’ said Ghassan Salame, the head of the UN mission in Libya UNSMIL.

The climate of lawlessness in Libya provides fertile ground for illicit activities, leaving migrants and refugees ‘at the mercy of countless predators who view them as commodities to be exploited and extorted,’ the report said.

The overwhelming majority of women and older teenage girls report having been gang raped by smugglers or traffickers, the report said.

‘Across Libya, unidentified bodies of migrants and refugees bearing gunshot wounds, torture marks and burns are frequently uncovered in rubbish bins, dry river beds, farms and the desert,’ it said.