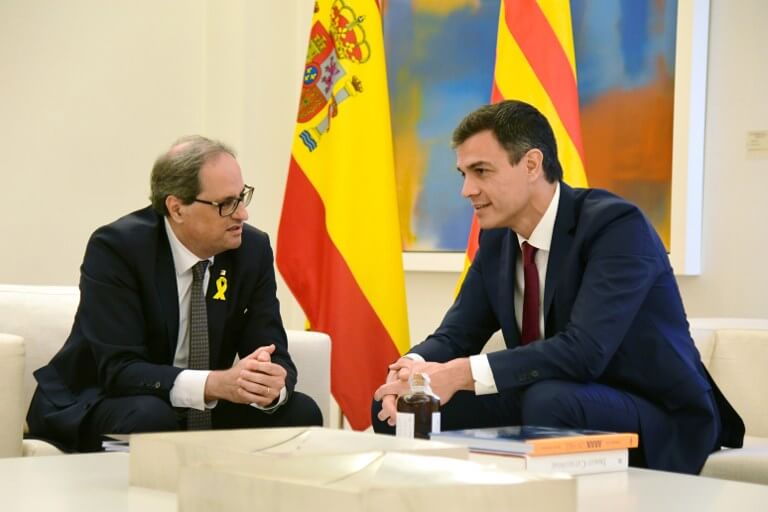 Spanish Prime Minister Pedro Sánchez will hold a cabinet meeting in Barcelona on Friday amid tight security as Catalan pro-independence groups plan to hold protests and block roads in the region.

The prime minister will also meet with the head of the Catalan government, Quim Torra, on Thursday on the eve of the cabinet meeting. It has been confirmed that the meeting will take place at Pedralbes Palace.

Meanwhile, with the approach of the extraordinary cabinet meeting of the Spanish government, due to be held in Barcelona’s Llotja de Mar, pro-independence organisations are preparing for protest.

One of the largest civic pressure groups, the Catalan National Assembly (ANC), has called for drivers to take part in a go-slow protest on Friday morning. The protest’s aim, said the ANC, is to drive ‘slowly through Barcelona to show them they are not welcome’.

Òmnium Cultural, the other major pro-independence grassroots organisation, and whose president Jordi Cuixart is in prison awaiting trial, has called a ‘Popular Cabinet Meeting’ to ‘say no’ to the presence of the Spanish ministers in the Catalan capital.

Taking place at 11am outside Barcelona’s França station, the event will include various civil society organisations. Òmnium’s vice president, Marcel Mauri, has insisted the event will be peaceful and called on the Spanish authorities to ensure there is no violence.

Some of the most controversial protests by pro-independence supporters recently have come from the Committees for the Defence of the Republic (CDRs) pressure groups. It has included blocking major highways, something the group plans to repeat on various roads on Friday.

The CDRs are also preparing a number of demonstrations, principally in Barcelona and Girona. The main CDR demonstration will take place outside the Llotja de Mar at 9am, where the Spanish cabinet meeting is due to take place.

In the past few days, the CDR has been rallying supporters mostly on social media, calling the cabinet meeting a ‘provocation’ as it falls on the anniversary of last year’s Catalan election that saw the pro-independence parties hang on to their majority in Parliament.

Spain’s deputy prime minister, Carmen Calvo, has refuted this ‘provocation’ claim. She has also stated that the cabinet meeting would be held in Barcelona ‘in a situation of normality’. Pedro Sánchez’s six-month-old Socialist (PSOE) government already held a cabinet meeting in the southern city of Seville in October.

On Wednesday, dozens of police officers from around Spain began arriving in Catalonia, specifically in the coastal resort of Salou, south of Barcelona. The Spanish authorities are deploying 600 officers to reinforce security while the cabinet meeting takes place.

In all, 400 officers from the Spanish National Police and 200 from the Guardia Civil will be deployed for the event. The decision has caused concern in Catalonia, with the memories of the heavy-handed tactics used by Spanish police deployed for last year’s 1 October referendum.

Whilst the Catalan government insists that the Catalan police, the Mossos d’Esquadra, can maintain order without outside help, the authorities in Madrid say the officers will remain in the region until 23 December, with the possibility of extending their stay should it be deemed necessary.

Also, with four jailed political leaders on hunger strike, the Prou Ostatges platform is planning a collective fast on 21 December, in an ’emblematic spot’ in Barcelona. The group’s idea is to bring together in one place all the people fasting in support of the hunger strikers.

In the evening there will be a major demonstration organised by a score of pro-independence groups, including the ANC, Òmnium, the CDR and the left-wing CUP party. Under the slogan ‘Tombem el Règim del 78’, the protest will take place in the Jardinets de Gràcia, beginning at 6pm.

Yet, not all the protests will be in favor of independence, as the Los de Artós group has planned a march beginning at 5.45pm in Barcelona’s Artós square. The group is against the independence process and intends to express support for the cabinet meeting.