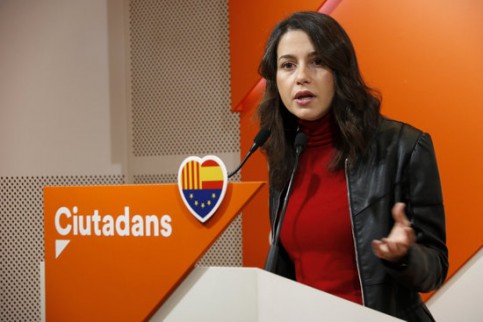 Quim Torra said on Saturday that ‘Slovenians were clear about it, they decided to insist on their self-determination, and move forward with all the consequences, until achieving their aims, let’s do the same as them.’

‘We are ready for what it takes to live free,’ he added in Brussels, shortly after an official trip to Slovenia, where he met the president of the Balkan country.

Inés Arrimadas, spokeswoman of the Ciudadanos (Cs) opposition party and the leader for that party (Ciutadans) in the Catalan parliament, reacted to the remarks by calling Torra and his government ‘a danger to democracy and coexistence.’ She said that Torra is advocating ‘violence and a civil conflict’.

On Sunday, Arrimadas urged the Spanish government to take the first steps towards suspending Catalonia’s self-rule.

The People’s Party (PP) leader, Pablo Casado, did the same this weekend, after the clashes between the Catalan police and groups of anti-fascist demonstrators in Girona and Terrassa on Thursday.

Spain’s Foreign Minister Josep Borrell claimed on Monday that the reference to Slovenia ‘is a way to express what seems to be a call for an uprising’.

Yet Borrell ruled out imposing direct rule on Catalonia again. ‘What is important are his actions,’ the foreign minister said of Torra.

Barcelona’s mayor, Ada Colau, asked the president to ‘immediately correct himself.’ The leader of Catalunya en Comú, which is non-aligned on the independence issue, said Torra’s remarks show ‘serious irresponsibility’.

Meanwhile, the far-right Vox party will file a criminal lawsuit against Torra for his call to follow the Slovenian example, which the party considers evidence of a conspiracy to commit rebellion.

The rising political force claims they will demand Torra’s arrest and precautionary detention because ‘it cannot be that someone who threatens an armed uprising and who is in charge of the police should remain free,’ said its leader, Santiago Abascal.

‘The Slovenian way caused 62 deaths with hundreds injured, we call for Torra to immediately enter prison for suggesting this way,’ he stated in a Tweet.