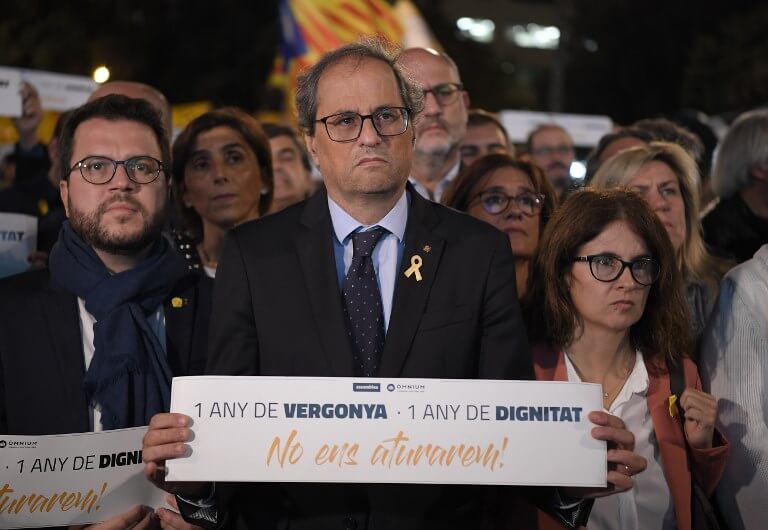 The Catalan president, Quim Torra, is to fast for 48 hours in support of the jailed leaders on hunger strike.

Torra originally planned to go without food for two days before 21 December, in order to show his support for the jailed officials on hunger strike within the first 20 days of their protest. According to reports, he will commence the fast from Sunday.

Torra’s protest to support them is not the only one. Some 50 people stayed in a Barcelona monastery overnight, with some of them fasting for 24 hours.

Torra will join the protest that began on Thursday of the Fast of Sarrià, an initiative in which MPs and activists of the pro-independence parties and entities carried out brief fasts to show solidarity with the jailed leaders.

Among the protesters were three ministers, including the culture and territory heads, and the government spokeswoman, as well as representatives of Junts per Catalunya, Esquerra and CUP.

La Vanguardia newspaper has reported that the Catalan president has avoided scheduling any official act on Monday in order to be able to fulfil his fast. With this action, Torra aims to show ‘solidarity, respect and admiration for the courage of colleagues in prison on hunger strike’.

Recent protests have been aimed to show solidarity not just with the jailed leaders who are refusing to eat, but also to reject the Spanish Constitution on the day marking its 40th anniversary.

The lawyers of the politicians on hunger strike have explained that they want to highlight their claim that Spain’s Constitutional Court is ‘blocking’ their cases reaching the European Court of Humans Rights (ECHR) by delaying decisions on their appeals.

The European Court of Human Rights only accepts for consideration cases which have gone through the whole national judicial path.

Spain’s Prime Minister Pedro Sánchez has already stated that the hunger strike is not justified because the rights of the jailed Catalan leaders are being respected.

‘I think it is important to stress that they will have a fair trial because we live in a society based on the rule of law and the judiciary is independent,’ he told reporters during a press conference at the end of the recent G20 summit in Buenos Aires.