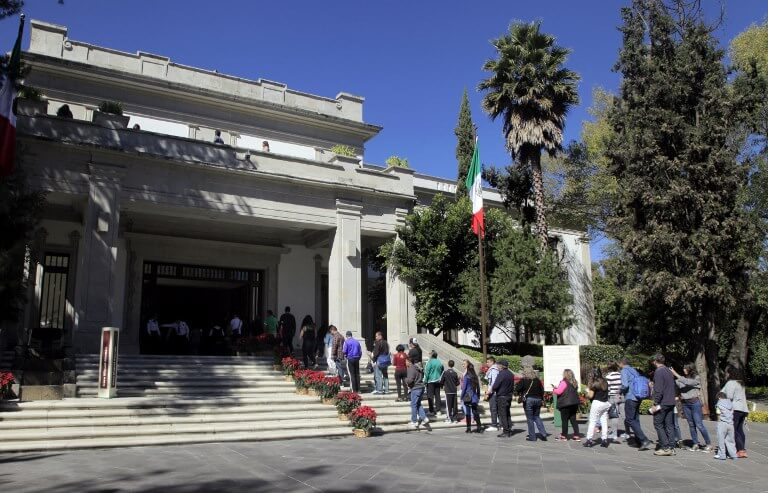 On Friday 30 November, Mexico’s presidential residence was the scene of a gala reception for the king of Spain, Felipe VI.

Hours later, its doors were thrown open so tens of thousands of ordinary people could stare slack-jawed at its opulent rooms.

Mexico’s new leader is an anti-establishment leftist who has made it his trademark to reject the trappings of power.

But he didn’t stop there.

Within hours of officially starting his six-year term at midnight on Saturday – even before taking the oath of office – Lopez Obrador, 65, had opened up the sprawling residence to the public.

In scenes reminiscent of the fall of Moamer Kadhafi in Libya, Saddam Hussein in Iraq or Viktor Yanukovych in Ukraine, huge crowds of ordinary Mexicans were suddenly meandering through the lavish rooms and leafy grounds of what had hours earlier been the country’s most heavily guarded seat of power.

The difference is that Lopez Obrador did not replace some reviled dictator in a bloody regime change: he won a democratic election to replace Enrique Pena Nieto.

But he is using Los Pinos to hammer home his message that Mexico – which had been governed by the same two parties for 89 years until his landslide victory – has been ruled by a ‘mafia of power’ that lived like kings by stealing the nation’s resources and the hard-earned taxes of ordinary people.

Judging by the reactions at Los Pinos – which received 85,000 visitors in the first two days – that public relations coup appears to be working.

‘This is very ostentatious. I never imagined a place like this,’ said Alejandra Barreto, 50, a shopkeeper from the central state of Puebla who was visiting Mexico City.

‘The rooms are frankly enormous. Why would one family need all this?’

After waiting in long lines, visitors were able to stroll up a stone avenue lined with statues of the presidents who have lived at Los Pinos since 1935 and wander through the series of mansions that form the compound.

The first stop is the plush office suites used by the three most recent presidents.

Then visitors arrive at the second-story presidential bedroom, complete with a dressing room of some 30 square metres and a palatial TV room.

On the first floor, there is a dining room with a 28-seat table, where Pena Nieto’s family ate daily.

In the basement, there is a private movie theatre with 35 reclining leather armchairs.

Officially, the residence is now a cultural centre.

But besides a scattering of musicians playing in the halls, there was not much culture on display the first day. The culture ministry, which now controls the complex, had no time to revamp it.

Instead, the objective appeared to be to show Mexicans just how large their leaders had been living while the rooms were still practically warm with their presence.

‘This is a pharaonic situation. It’s completely unreal for any Mexican,’ said Gilberto Gutierrez, 30, from the northern state of Aguascalientes and a local leader in Lopez Obrador’s party, Morena – now Mexico’s largest party, with majorities in both houses of Congress for its coalition.

‘It’s a place that marks the enormous distance between [Mexican leaders] and the rest of the population, and also the ostentatious way that the country’s politicians have lived,’ said political analyst Hernan Gomez, who visited on the first day.

Ileana Ramirez, a 43-year-old domestic worker, agreed after sitting on the lawn at Los Pinos to watch a huge screen broadcasting Lopez Obrador’s inaugural address, in which the new president promised a ‘deep and radical transformation.’

‘He is breaking the paradigms of everything we’ve lived our entire lives. For as long as I can remember, I’d never felt like power was in the hands of the people,’ she said.