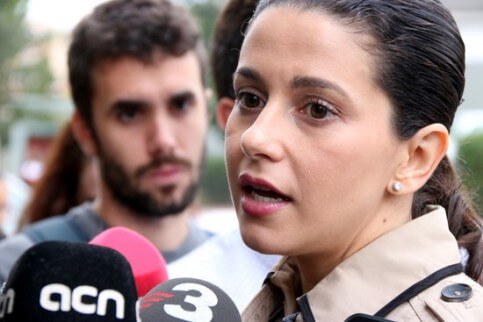 The leader of the opposition in Catalonia, Inés Arrimadas, has accused Catalan public television (TV3) of being biased in favour of the independence movement.

Arrimadas made the remarks in a prime-time interview on the same TV outlet on Sunday evening, when she was interviewed by the head of the network, Vicent Sanchis.

‘[TV3] lies, a lot of lies are said, the reporting does not reflect reality, I could give you a lot of examples,’ she told Sanchis.

Arrimadas, the leader of the Ciutadans (Cs) party, criticised the broadcaster’s news bulletins for saying that several former government members are ‘in exile’, referring to the former president Carles Puigdemont and some of his former ministers.

For the Cs leader, the former officials aren’t exiles, and her party has repeatedly referred to them as ‘fugitives’ and ‘members of a coup d’état’.

Arrimadas also claimed that her party’s voters ‘have a right to watch TV3’ but cannot do so, as they do not feel represented when watching it.

Sanchis defended the TV outlet and called on Arrimadas to show ‘responsibility’. The TV3 director also accused her party of stating ‘nonsense and untruths’ against the broadcaster.

Viewing figures for the interview were unusually low for a prime time show on TV3: some 178,000 viewers (6.9% share).

No to visiting jailed leaders

During the interview, Arrimadas also said she would not visit the Catalan pro-independence leaders in jail after receiving an invitation to do so by the incarcerated politicians and activists themselves.

‘I do not accept that visiting them in prison or not is a sign of humanity,’ she said.

Arrimadas also revealed that she tried to persuade two of the leaders not to declare independence by warning them of the consequences in a private conversation over coffee.