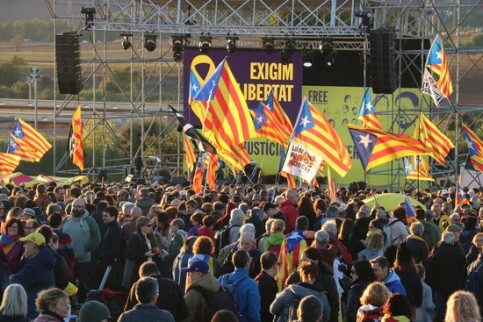 Thousands of people gathered outside Lledoners prison on Thursday evening to demand freedom for the nine incarcerated Catalan leaders.

Around 15,000 protesters, according to the organisers, came from across the country with private vehicles and also some 100 coaches.

On Friday two of them, Oriol Junqueras and Joaquim Forn, will have been one year behind bars, and the event intends to mark the anniversary.

The seven male pro-independence jailed officials are in Lledoners prison, with the two female ones being in two prisons elsewhere in Catalonia.

The Catalan parliament president, Roger Torrent, and the Catalan government’s vice president, Pere Aragonès, were some of the dignitaries talking to the crowd in an event organised by Free Junqueras organisation.

This, the day before the Spanish general prosecutor is expected to proposed the sentences for each of them ahead of the upcoming trial.