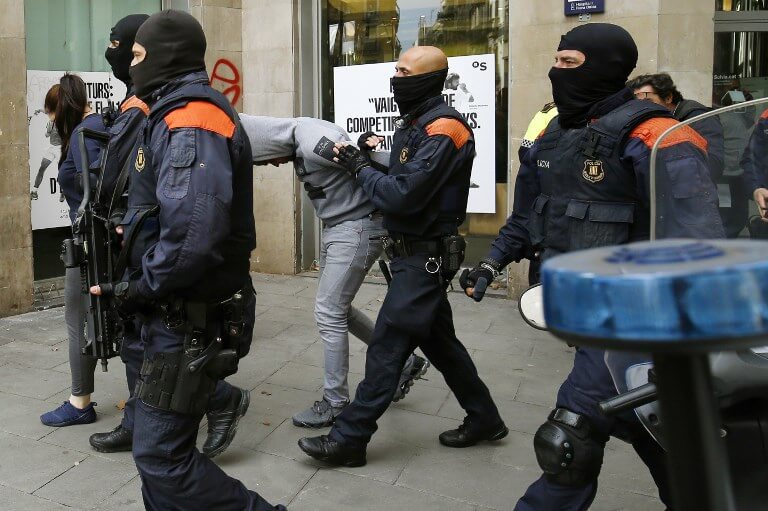 Hundreds of police backed by a helicopter on Monday raided dozens of apartments in Barcelona, used for selling and consuming heroin and other drugs. Around 55 people were arrested.

The raids started in the early morning after a two-year investigation into the issue, and after neighbours have been complaining for months about empty apartments being used to sell drugs.

Several narrow streets in the central Gotic and Raval neighbourhoods which are popular with tourists were blocked by blue police vans as armed officers wearing ski-masks stood guard outside buildings.

According to police sources, a big part of the people arrested are Dominican nationals and the raids occurred not only in the Gotic and Raval areas, but also in Poble-Sec and Nou Barris neighborhoods, as well as several towns in the Barcelona metro area.

Over 700 officers from Catalonia’s regional police force, the Mossos d’Esquadra, and more than 150 officers from Barcelona’s municipal police were involved, the two police forces said in separate tweets. The 40 apartments they raided have become known as ‘narcopisos‘, or ‘narcoflats‘ in English.

Some police sources also said that inside most of the flats there were a lot of people.

A local court in Barcelona is leading the investigation, which was opened for crimes against public health and criminal organisation.

‘They should do this every month because the neighbourhood is very corrupt,’ Olga Ferrer, who runs a shop in Raval, told AFP.

‘There are syringes in the streets, people shooting up, totally wrecked, people are mugged, threatened with knives … it is frightening walking through here.’

Residents of the two central neighbourhoods have long complained that empty flats, many of which are owned by banks and investment funds following Spain’s property crash a decade ago, had been taken over by drug traffickers as places where people come to buy and use drugs.

They say the arrival of these ‘narcoflats‘ has led to a rise in muggings of tourists as well as local shops by addicts seeking money to buy drugs, as well as violence between the different drug trafficking rings that operate in the area.

A video of a man wielding a large machete in broad daylight over another man as he lay defenceless and injured on the ground of a street in Raval made headlines in Spain last month.

Former French Prime Minister Manuel Valls, who was born in Barcelona, has made fighting crime in the city a central theme of his campaign to become the city’s mayor in an election next year.