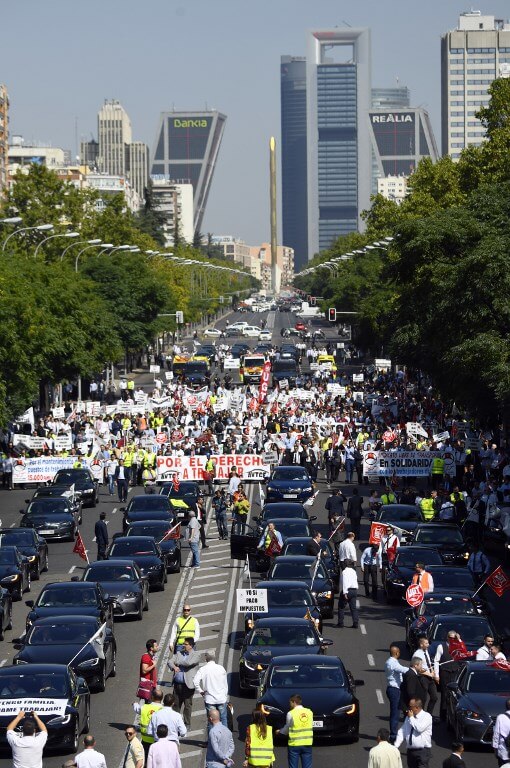 Hundreds of drivers for ride-hailing services Uber and Cabify marched down a central Madrid avenue on Thursday to protest plans by the Spanish government to tighten regulations in the sector.

The demonstrators chanted ‘Let us work!’ as they made their way along the Spanish capital’s Paseo de la Castellana, accompanied by about 40 cars with tinted windows to the public works ministry. Nearly 1,300 people took part in the demonstration, according to local police.

The protest comes a day after both ride-hailing services offered one free trip per customer in Spain in an attempt to raise awareness of a months-long, sometimes violent row that has pitted them against taxis.

The conflict mirrors other rows in European countries, as taxi drivers say Uber-style competitors are threatening their livelihoods as their licences are much more expensive.

‘There is work for everyone!’ said Jiheje Hidalgo, a 27-year-old Cabify driver, adding that in the United States there was enough work for both taxi and Uber drivers.

Taxi federations have long called for the government to implement a ratio of one professional, non-taxi driver – otherwise known as VTC (Tourism Vehicle with Chauffeur) – for every 30 taxis.

Spain, however, is far off that mark.

According to the public works ministry, which oversees transport in Spain, there is currently around one VTC for every six taxis.

While details of the decree have not been unveiled, a ministry spokesman said the government aimed to ‘re-establish a balance’.

The ride-hailing service drivers plan to repeat their protest on Friday, when the government is expected to pass the decree.

The UGT union which backed Thursday’s protest estimates any move to limit the number of VTCs could involve the loss of 60,000 direct or indirect jobs.