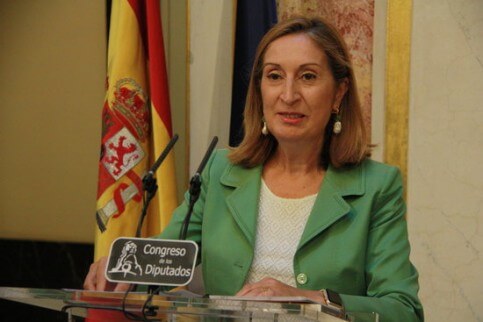 The Spanish parliament speaker, Ana Pastor, unexpectedly invited Quim Torra to the lower chamber in Madrid for him to be able to ‘defend his political stances’.

In a political event on Tuesday morning, she welcomed Torra but said his position ‘should be within the legal framework’. ‘Otherwise, we change the law,’ she added.

Pastor justified her proposal by saying that she is working towards ‘constructive’ dialogue.

She did this whilst also criticising the pro-independence movement, and warned that ‘answering firmly, clearly and with determination to the ones who propose to ignore the law’ is needed. She claimed Spain’s Constitution has to be defended, which, for her, means ‘rejecting the blackmail of separatists’.

Some hours after her remarks, the Catalan government did not rule out that Torra would accept the offer.

‘We can’t say no from the start, but we want more details,’ said the cabinet spokeswoman Elsa Artadi.

In June 2017, a week after the then Catalan executive presented the 1 October referendum on independence, former president Carles Puigdemont offered to attend the Spanish Congress to speak about the vote.

Pastor accepted his offer but on one condition: a vote on the referendum had to take place in the Spanish Congress. Puigdemont rejected it, so he never attended, and on Tuesday Artadi said that the same condition would make Pastor’s offer ‘sterile’.

Has any Catalan president spoken in Spanish parliament?

Never in recent history has a Catalan president in office spoken in the Spanish Congress plenary session.

But, in April 2014, three representatives of the Catalan Parliament (Marta Rovira, Joan Herrera, and Jordi Turull) defended an agreed referendum on self-determination for Catalonia in the Congress through an amendment of the Spanish Constitution.

The Spanish lower chamber voted overwhelmingly against it, with 47 Yes votes, 299 No votes and 1 abstention.

Four years after that session – which led to an unofficial vote on self-determination without Madrid’s consent later on in 2014 – Rovira is in exile in Switzerland, and Turull in prison. Joan Herrera, against independence and former leader of a green alliance, is no longer in politics.