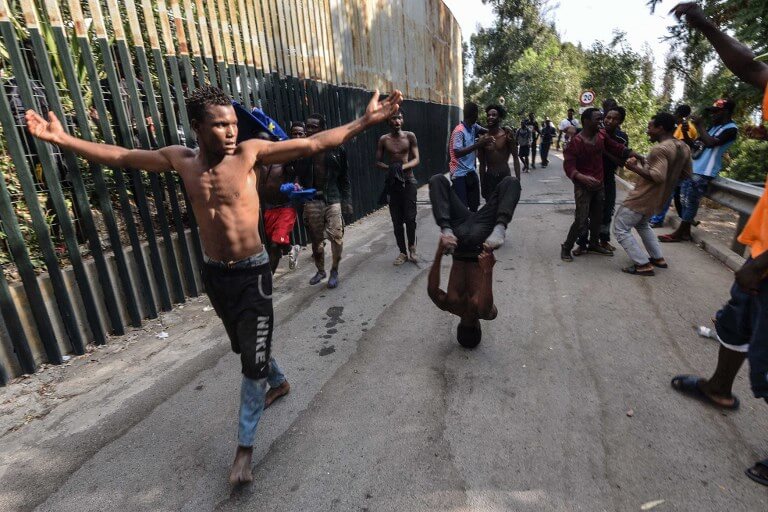 Over 100 African migrants forced their way into the Spanish territory of Ceuta on Wednesday after storming a barbed-wire border fence with Morocco and attacking police with caustic quicklime, a local official said.

In the second assault on the Spanish border in a month, seven police officers were lightly injured when migrants threw quicklime and battery acid as they tried to scale the fence, a spokesman for the Spanish government’s representative in Ceuta told AFP, adding that some 115 migrants managed to enter the tiny territory.

An undetermined number of migrants were also injured in the assault on the border.

Some waved Spanish or European Union flags as they made their way to a temporary migrant accommodation centre.

‘All my support to those security forces who are facing the migratory challenge in an exemplary way, especially the agents who were injured today,’ Spanish Prime Minister Pedro Sánchez tweeted.

Every year sub-Saharan African migrants living illegally in Morocco try to enter Europe either by climbing over their border fences or swimming along their coastlines.

Spanish territories Ceuta and Melilla have the European Union’s only land borders with Africa, drawing migrants trying to reach the bloc.

ALSO READ: Spain, Portugal to take in most of Aquarius migrants

The assault on the border comes as Ceuta was marking Islam’s Eid al-Adha religious feast. Over 600 African migrants got past the double border fence on 26 July, in the biggest run on the border since February 2017.

Fifteen police officers were injured in the violence, some sustaining burns to their face and arms.

Some 3,100 migrants have entered Ceuta and Melilla by land since the start of the year, according to the International Organisation for Migration.

Over 25,000 others have arrived in Spain by sea, making it the main entry point for migrants arriving in Europe, after Italy and Greece.