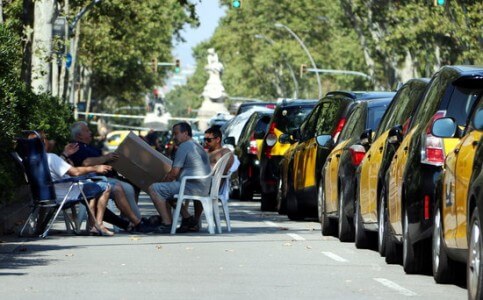 The taxi strike in Barcelona that saw two major roads occupied by drivers for eight days has had “a totally negative impact” on the city’s image as a tourist destination. This, according to the president of the Association of Specialised Travel Agencies (ACAVe), Martí Sarrate.

Sarrate said that it is “incomprehensible” for a “necessary” public service to “block the centre of the city” and impede tourists’ mobility. He went on to criticise politicians who “consented”, allowing the sector to take up a “strong position.”

According to the ACAVe president, the taxi sector has to adapt to “the needs of new technologies,” and questioned the legality of the industrial action that could be resumed in September if the Spanish government doesn’t deliver on its promises.

On Thursday, the sector apologised for any “collateral damage” caused by the strike and the mobilization of drivers that all but shut down two major roads in the heart of the capital.

“We apologise to city merchants and small businessmen who have been affected, as well as to the public,” said the sector’s spokesman Tito Álvarez at a press conference. “We consider ourselves part of this city,” he went on to say, highlighting that the industrial action was because they had no “choice” left.

Ter Stegen: ‘It would be an honour’